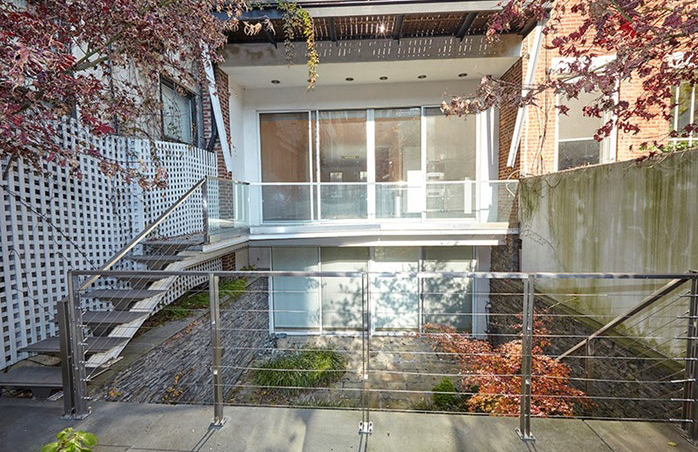 Half of fashion designer Riccardo Tisci’s sprawling New York townhouse is up for rent – if you’re willing to stump up $14,000 per month.

Givenchy’s former creative director bought the pre-war Brownstone with best friend Marina Abramović back in 2011 for $5.3 million. He planned to take the top three floors, while she took the bottom of the Manhattan property.

Just a few years later, Tisci bought Abramovic’s share of the SoHo townhouse – located on King Street in Hudson Square – after the artist reportedly felt ‘lonely’ while he was away travelling. It’s Abramović’s 2,405 duplex that’s now up for rent.

The understated two-bedroom abode looks out onto the private back garden via floor-to-ceiling glass. Rooms feature wooden floors and high ceilings, and the living room includes a painted brick fireplace.

Brown Harris Stevens brokers Juliana Frei, Drew Glick and Sophie Joseph are listing the property, which is available immediately, and also comes with a basement for utilities and extra storage.

But don’t expect to bump into the fashion designer there anytime soon.

Tisci is rumoured to be heading to Versace, following his departure from Givenchy earlier this year. He also revealed to The New York Times in 2015 that he hadn’t spent a night there, preferring to stay instead at the nearby Mercer Hotel.

Read next: Fashion designers’ homes you can visit

This €2.39m Paris duplex is an instant win for book-lovers