Welcome to our weekly property digest, where we bring together the best homes for rent and sale across the world. Among our discoveries, this week is a secluded island bush retreat in Australia and a modernist villa in Belgium.

3 bedrooms; POA via Modern House
Dangar Island House was designed by Jan Robertson of architectural firm Robertson and Hindmarsh as a writer’s retreat in 2007. Shaped like a bird watcher’s hut, the New South Wales property – which is on the market for the first time – is hidden in the bush on along the Hawkesbury River. Get a closer look.

7 bedrooms; €1.975m via ArchitectenWoning
Jacques Dupuis and Albert Bontridder built Villa Van Den Schrieck in 1965. The heritage-protected building comprises two parallel wings – one for living, one for sleeping – topped with geometric flat roofs of different inclines. Seen from the garden, the expressive whitewashed western façade is crowned with two dark slate boxes. Take a look around the seven-bedroom bungalow.

8 bedrooms; POA via Casa & Country
This historic Italian property in the Tuscan countryside dates back to the 17th-century. Villa Michele is located in a private park, 10 minutes drive from Florence’s city centre, and is surrounded by landscaped gardens. It was restored in 2001 and features original details including an ornate stone and gilt staircase.

5 bedrooms; POA via Modern House
Welch House was designed by architect Peter Swan in the 1960s and is on the market for the first time in 45 years. It has original features such as timber cabinetry, wall tiles and wallpaper, and is built around a central courtyard and palm tree garden.

Sleeps 2; from £851 per night via Airbnb
Chalet Levissima 3000 sits high in the mountains, 3,000 metres above the town of Bormio overlooking Stelvio National Park. The Italian ski chalet was designed using local and sustainable materials that blend with the surrounding environment. 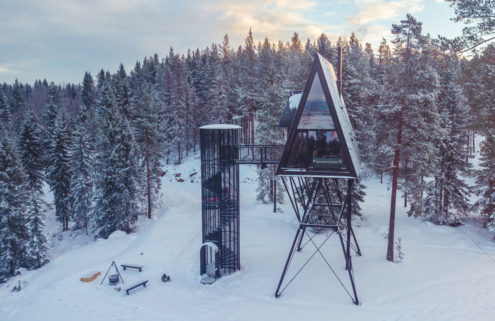