Love it or loathe it, Centre Point is among central London’s most prominent landmarks. For three years the former office block has been under covers while Conran + Partners have been turning it into a new 82-home residential tower.

The thundering Grade II-listed Brutalist structure was designed by Swiss architect Richard Seifert and completed in 1966. It was among the city’s first tall buildings, made using precast structural components – then in its relative infancy – but the 34-storey office block was also chronically under-occupied, and was often referred to as ‘London’s empty skyscraper.’

Developer Almacantar bought Centre Point in 2010 and enlisted Conran + Partners to overhaul the building for its new role.

‘The technical task of physically converting a building of this type and the construction process this involved posed a significant challenge that required a highly creative approach,’ said the firm’s senior designer Tim Bowder-Ridger.

Conran + Partners took cues from the building’s futuristic exterior, whose honeycomb Portland stone design has been given a spruce and fitted with new windows.

Adds Almacantar: ‘The building’s personality comes from its texture, which creates a deep three-dimensional pattern of shadow and light. This movement from shadow to light is the inspiration behind the Conran + Partners-designed interior.’

Like the restored lobby – which features Carrara marble and black terrazzo – apartments are designed with monochrome colour palettes. Dark timber-lined cores branch off into bright, lightly-coloured bedrooms and shared living spaces with blonde timber elements and huge expanses of glass.

Bespoke ironmongery, joinery and tiling have also been fitted inside the dwellings, which start at £1.8 million for a one-bedroom home, rising to £7 to £8.5 million for a three bed. Buyers can choose from a selection of interiors by Conran + Partners or design firm Morpheus – or purchase their unit raw. They’re a steal compared to the £55m duplex penthouse, which crowns the Modernist building.

Amenities include a first-floor swimming pool, gym and sauna. A residents club – with caterers kitchen cinema and spa – will occupy the floor above.

Back on the ground, MICA (formerly Rick Mathers Architects) is overseeing the redesign of Centre Point’s 15,000 sq ft street-level public square, which will be unveiled at the end of the year. It will include cafés, retail spaces and restaurants, while the new Tottenham Court Road station at the base of the building will welcome Crossrail in December 2018. (The 26-mile hyper-fast route is set to open fully in 2019).

Read next: London’s Television Centre is fresh from its £1bn revamp – and you can live there 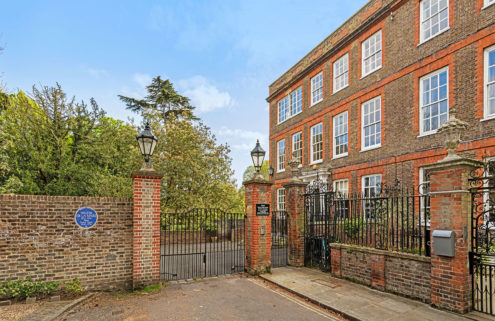 Peek inside a pair of poets’ homes in London