Architecture I by Muriel Verbist

Inside the windmill home of Belgian architect Lou Jansen

A historic dwelling for a Modernist designer

Lou Jansen is one of Belgium’s most notable Modernist architects but, internationally, he is relatively unknown. The leafy suburbs of his home city, Turnhout, are peppered with his striking designs yet Jansen’s own house is radically different to his oeuvre.

Jansen bought the stone windmill – featured in Belgian Architects and their Houses – in 1967, when it was a derelict shell. He turned the 19th-century building into his studio first, before transforming it into his family home, which he shared with his wife Anita and children.

Our two children were born and raised here and have spread their wings but we still live here. My wife has always hoped that I would build a large, modern house for our family, like I did for many of my clients. But she had to settle for our little old mill.

I discovered that building a home for myself was very difficult. The house would never be as groundbreaking as I would want it to be.

What I like so much about this mill, is that I was not able to claim authorship for it.

We did add some elements to the original building to make it more viable for our family, but always in such a way the intervention can be scaled back or removed without leaving any trace. I have always insisted on ensuring that the mill’s individuality and glory is visible throughout. I chose to use materials like plastics and metal, to clearly highlight the difference between the original and new elements.

The master bedroom and my office used to be upstairs but now our life has moved downstairs, in the space where the carts were driven under the mill to load or unload the grain.

This abridged excerpt is taken from ‘Belgian Architects and their Houses II’, by writer Muriel Verbist and photographer Diana Hendrikx, published by Luster 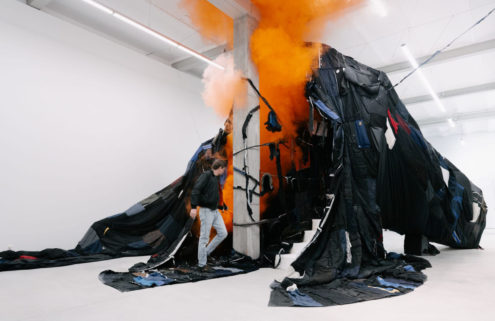