Photography app VSCO has launched a hybrid office and studio space in New York that will be available for anyone to use.

The Open Studio is designed by Debartolo Architects as a ‘blank canvas’, giving visiting photographers the freedom to change the environment as needed. The practice also designed the company’s stripped back Oakland HQ, which opened at the end of last year.

Interiors are minimal, with a monochromatic colour scheme and wallpaper made from oversized photographs. The space is split in half, with workstations provided for employees and a separate area for photo shoots.

Guests are able to book free two-hour-long slots in the studio via a submissions process. The only stipulation is that it’s used for non-commercial projects.

‘The ideas that excite you shouldn’t be a forgotten scribble in a notebook, shelved indefinitely until you can afford an exorbitant studio fee,’ says VSCO. ‘We’ve been providing you with a digital space to create and share honestly, and now we want to do the same in a physical space.’ 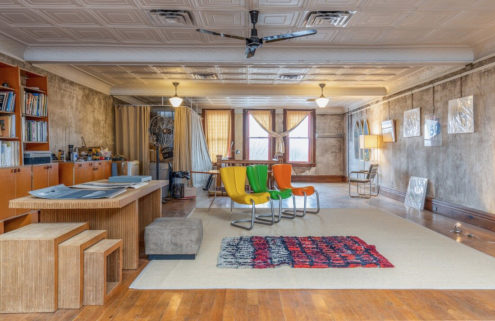