How should architecture react to our changing climate? Francois Perrin explores the thorny issue in new project Air Houses: design for a new climate at the Chicago Architecture Biennale.

The LA-based architect has suspended a series of silver pyramids between the tropical palms of the city’s Garfield Park Conservatory that probe the disconnect between nature and the built environment.

‘Throughout most of human history, architecture has developed in response to nature,’ says Francois Perrin. ‘The invention of air conditioning at the beginning of 20th century isolated the architecture from the environment by preventing building and structures from using sun, rain and wind as a natural way for regulating the climate inside a house.’

But with a rising global climate and economic uncertainty, the architect says it is necessary to reexamine this past and revert to climate-responsive design in order to design for the future.

‘You can look at lots of parts of the world (Africa especially) where they’re still using old techniques of cooling or heating as well as sustainable construction,’ says Perrin. ‘Contemporary Japanese architecture also succeeded in bridging the past and the future.’

Perrin’s lightweight fabric Air Houses use features gleamed from these eco structures – such as the Korowai tree houses of Papua New Guinea – while riffing on the ancient form of the pyramid.

They’ve been made from a reflective, water and windproof material, woven from threads of aluminium. The pyramids ‘float’ atop the tree canopy inside the conservatory, allowing for airflow and providing natural ventilation for the structures.

But that’s not all: ‘They also provide a framework for plants to grow and become part of the architecture, reactivating the symbiosis between nature and structure,’ says Perrin.

Air Houses: design for a new climate is part of the Chicago Architecture Biennial, which runs until 7 January 2018.

Read next: Can these glass cabins help cure stress? 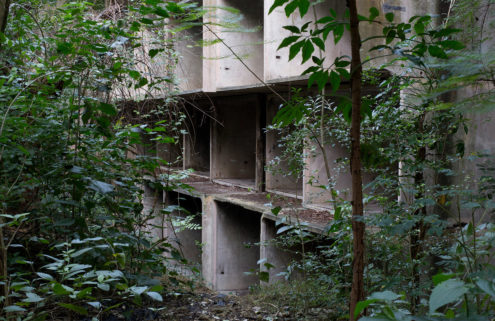 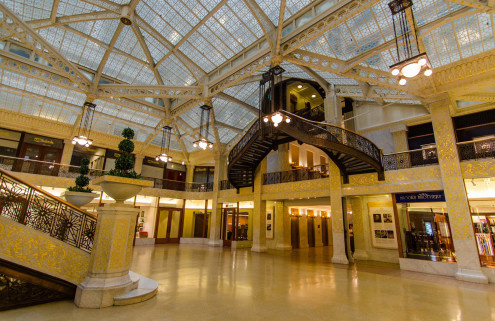