Deep divisions within political parties, the UK and the whole continent have quickly become the zeitgeist of our time. Amid the uncertainty, there are few options being laid out on the table. But as a Brexiting Britain steps into the unknown, does architecture have a role to play in reuniting the country?

Eric Wong, a Masters graduate from London’s Bartlett School of Architecture, tackled the issue for his final year project, creating an illustrated blueprint for a truly united United Kingdom that has the Isle of Man as its capital.

‘Relocating Britain’s capital may appear totally fanciful and farfetched but such a move has been considered in the past to the regions of Lancashire and York – a more geographic centre,’ says Wong. ‘The relocation to the Isle of Man would see a radical geographical redistribution of wealth and ease pressures on London’s transport and housing market.’

A seemingly prescient Wong started work on the project – titled Cohesion: A blueprint for a united kingdom – last year before outgoing prime minister David Cameron had even announced the date for the EU referendum.

The Isle of Man is technically not part of the UK (it’s a crown dependence). But as the new capital, it would shift the epicentre to a place roughly equidistant to London, Cardiff, Belfast and Edinburgh, connecting the UK’s four nations. And in Wong’s vision, there are increased provisions for clean water, sustainable energy resources, and more land for housing. The new city would also become a safe haven for refugees.

Adds Wong: ‘Cohesion can provide for the disenfranchised generation within the UK and the increasingly dislocated global communities.’

He’s under no illusions, though, about the possibility of his blueprint ever coming to fruition. ‘This does not seek to find a solution to current issues, but aims to speculate on an alternative and question the “what if” scenario,’ he says.

More importantly, the project is about envisioning a better future we can work towards. ‘Cohesion projects a forward-looking attitude, duty and responsibility to reunite a broken Britain.’

Read next: A photo essay that imagines homes for the homeless in Los Angeles 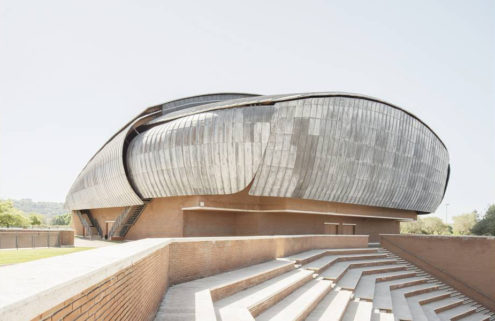