Anderson and Low photograph the City of Mines

Exploring the boom and bust legacy of Colorado’s gold rush

Photographers Jonathan Anderson and Edwin Low have travelled the world shooting Olympians, derby-winners and professional athletes. But a trip to the US Olympics Centre in Colorado Springs in 2000 led to a discovery that would captivate them for the next 15 years and take them down a new path – the small mining city of Victor.

‘The ramshackle beauty, and the stamp of the humans who created Victor is all over its buildings,’ say the pair. ‘Architecture is a recurrent theme in our work – but we’re not interested in what buildings look like, only what they feel like when we look at them.’

Known as ‘the city of mines’, Victor was founded in 1891 as prospectors flooded Colorado in search of gold and precious minerals, some 40 years after the Californian Gold Rush hit its fever pitch on the West Coast.

‘Much of the architecture of the city consists of the original 1890s and 1900 structures,’ say the duo. And it’s a period that saw the city’s population swell: by 1900, Victor had become the second largest mining district and its population reached 18,000 people.

But as boom reached crescendo, bust wasn’t far behind.

World War I took miners from Battle Mountain to the battlefields of Europe. Then, the Great Depression strangled industry, further beset by the onset of World War II.

In 1962, just over 70 years after the first gold nugget was discovered, all of the district’s mines had closed and by 2010, the city’s population dwindled to just 397 people.

Today, Victor is a city whose very existence is in danger, as Anderson and Low explain. ‘After decades of no mining at all, strip mining is now gouging the last ounces of gold from the mountain, chewing it up in the process and encroaching the city. It’s ironic that the main reason for its existence may ultimately bring about its demise.’

Downtown Victor is a place without traffic lights or stop signs. Local industry is limited to a handful of shops, a couple of bars and a cafe. It’s the kind of place you have to drive out of for provisions – but it’s also a place filled with wonder, and where the past feels tangible, as the duo’s images show.

‘There’s an amazing amount of commercial text painted on the sides of the building, which seems to take on a personality of its own. Visiting the cemetery, many of the grave markers are made of wood – as a result they have faded and eroded away, so the names of the dead have disappeared from visible history…’

While this could be an apt metaphor for the city’s future, Anderson and Low are more optimistic. ‘There are new people moving there, and the residents are very keen to preserve and restore the buildings,’ they say.

Time will tell what the future holds for the little city of mines.

Anderson & Low’s exhibition, ‘City of Mines’ runs until 3 January at Colorado Springs Fine Art Center. Their book of the same title is out now via Dewi Lewis Publishing

Inside the Oxford Botanic Glasshouses – ancient botany in the historic city 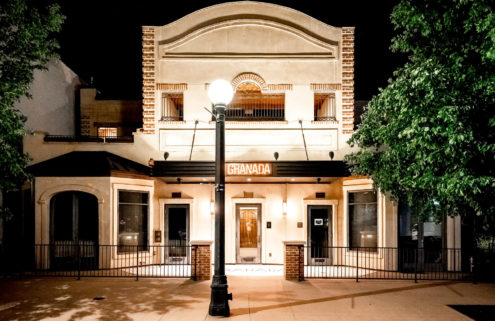