A post-and-beam Surrey home designed by the bad-boy of Brutalism, Erno Goldfinger, has hit the market for £3m.

Teesdale was commissioned by businessman Jack Perry in 1967. According to Historic England, it’s the only post-war British home in its original condition by the Hungarian-born architect, who famously provided inspiration for James Bond’s nemesis. The Grade II-listed property is now on the market via Savills.

Unlike Erno Goldfingers’ iconic concrete high-rises, the flat-roofed midcentury property is clad in timber and set over a single storey, with floor-to-ceiling glass walls overlooking its four-acres of grounds. Jack Perry was among the first entrepreneurs to develop trading links with China in the 1950s and 1960s, and the Surrey home’s layout and interiors blend eastern and western influences, with a flowing floor plan.

Living spaces are tucked into one wing of the Modernist property, with four bedrooms in the other. These two distinctive halves are separated by a central glass conservatory (currently a dining room), which tumbles out onto a long sun terrace for entertaining.

Across the Modernist house, interiors channel a minimalist vibe and are stripped of ornamentation, letting the building’s materials do the talking. Wooden walls and exposed beams have been teamed with glass planes and white floor tiles which run the length of the building.

Teesdale sits within the village of Windlesham, and is a short drive from both Ascot and Windsor.

Read next: Scandi-style Pavilion House hits the market in Suffolk for £1.5m 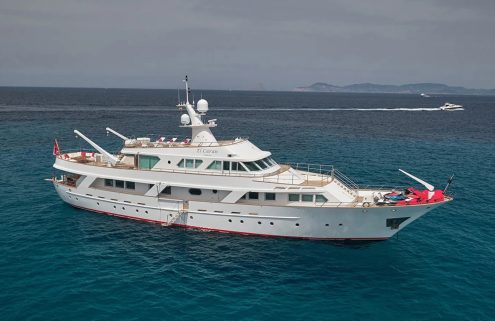