A converted farriers building comes up for auction in Melbourne

Fender Katsalidis used the shell of an 1880s farriers building to create this bold contemporary home in Fitzroy, Victoria.

It’s one of the more diminutive projects from a studio best known for creating Melbourne’s tallest skyscraper, Eureka Tower, once the tallest residential building in the world. But it has plenty of space and volume.

The four-bedroom property at 423 Napier Street – up for auction via Jellis Craig on 16 September – is accessed via a garage and entrance atrium. These give way to a flexible, free-flowing family home that could also be a live/work space.

At the heart of the Melbourne property (guide price: AUD $3.4 million to $3.6 million) is a light-filled living and dining space, with wrought iron columns and a circular wall that conceals a study. A walnut staircase leads up to three bedrooms, including a ‘parents’ retreat’ separated by a walkway over a void. It has its own mosaic tile-lined ‘spa’ and balcony.

A second workspace on the ground floor also doubles as a fourth bedroom, ensuring extra flexibility. Two courtyards add to the outdoor space.

Fender Katsalidis – which won the AIA Award for Commercial Architecture in 2008 – is no stranger to adaptive reuse ventures. For one of its early projects, it converted former grain silos in Melbourne’s Richmond into apartments.

Read next: An architect’s monochrome warehouse hits the market in Sydney

An industrial 1920s garage loft is for sale in San Francisco 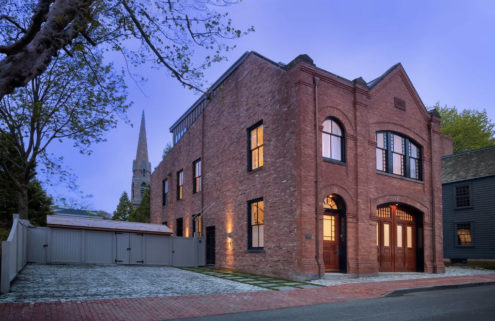 A converted fire station is for sale in Rhode Island