A scrap of ex-industrial land becomes a light-filled home

A Victorian terrace in West London hides an architectural secret. Step through a plain garage door into a courtyard and the peaks of its vaulted roofs are just visible behind a steep wall. Enter a second door and the building’s crisp white geometry envelops you.

Vaulted House is the latest infill architecture project from vPPR – a trio of female architects turning London’s backlands into residential sculptures. First they carved two triangular houses out of tricky plot in Tufnell Park – scooping a RIBA London Regional award along the way – and now they’ve turned a landlocked site in Hammersmith’s Brackenbury Village into a light-filled, four-bedroom home.

Not many architects would relish a patch of contaminated, ex-industrial land, with no outlook. ‘But problem-solving is the most interesting part for us,’ says project architect Tatiana von Preussen. ‘With infill architecture, you get to turn things on their head because you’re not responding to a historical context.’

Only a few windows were permitted on the site’s walls – all that remain of its previous incarnation as a taxi garage – so the ‘manipulation of daylight’ was key to the design. Main living spaces are located on the open-plan upper floor, subtly demarcated by the vaulted roof lights and patterns of the wood flooring below. Daylight also funnels down to the bedrooms and double-height playroom on the ground floor via glazed courtyards.

‘We did a lot of light studies to maximise the shifting position of the sun during the day,’ says von Preussen. And it’s paid off. A home that could easily have felt claustrophobic and confined, feels animated and open. vPPR have cleverly directed the light according to different areas of the house’s usage, with morning light hitting the breakfast space and kitchen, and evening light catching the library and dining area.

Viewed from above, the structure reads like a building that’s been snugly inserted into its plot; its roof acting as an artwork for neighbours to gaze upon. ‘The roof is the only facade we ever get to design,’ says von Preussen. Making it a thing of beauty was key to securing planning permission – a trick they learned from Ott’s Yard, their Tufnell Park project, where green roofs helped them negotiate 23 party wall agreements.

With Vaulted House, they had a very active residents’ association to contend with. ‘It was your worst Nimby nightmare,’ says von Preussen. But the trio are becoming skilled at local PR. ‘The consultation process was really important. We held events for residents on the site and we created strong graphic visualisations of the building,’ she explains. ‘In the end, we got quite a few letters of support.’

It’s not hard to see why. Vaulted House is a remarkable response to a tight urban plot, and – in space-starved London – it offers ideas that could be applied elsewhere. 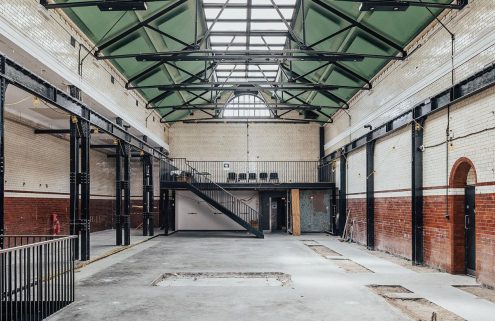