‘This is not just a restoration, it’s an intervention’, says Pardo. ‘Our project aims to change the DNA of a neighbourhood to respond to current social needs.’

Colonia Juárez was an affluent area in the 1900s and became home to artists and intellectuals in the 1960s. It plunged into decay following a revolutionary war, two earthquakes and a ‘rent freeze’ that spanned 50 years.

Now it’s among the historic city centre’s fastest emerging neighbourhoods, home to a new wave of art galleries, restaurants, cafés, offices and housing – bolstered by the arrival of Havre 77.

Pardo and Amezcua have retained the French-style building’s opulent facade and introduced a new glass and steel extension above and behind it. Original features, such as French shutters, brickwork and cornice details have been retained and juxtapose fresh concrete walls and timber floors.

The mansion’s restoration follows other adaptive reuse projects in the neighbourhood spearheaded by ReUrbano and the duo, including Havre 69 – a mansion converted into office, commercial and residential dwellings – and Market Milan44, which saw an old industrial building transformed into a marketplace. 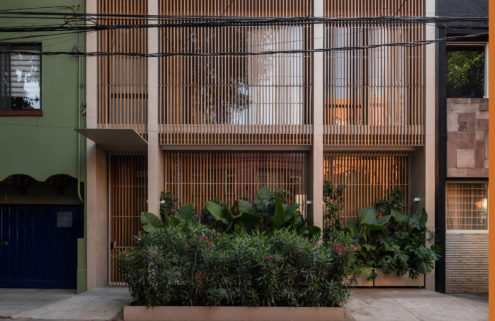 Octavia Casa is a serene stay in Mexico City