Pictured: the East Pyongyang Grand Theatre (1989) is formed of interlocking semi-circular and rectangular buildings. Inside is a 3,500-seat auditorium that looks straight from a Wes Anderson film. The 2007 renovation saw the installation of overlapping peach walls, that mimic pulled-back curtains, purple upholstered seats and blue vinyl flooring. Photography: Oliver Wainwright

Blue crow’s Pyongyang architectural guide pulls back the world’s last iron curtain to reveal a snapshot of life in the Hermit Kingdom through iconic landmarks in the capital.

Built from 1948, Pyongyang has been closed to the world for 70 years and is a time capsule with an aesthetic like no other city on the planet. Its ‘surprisingly original’ architecture is a bombastic mix of brutalism, colour and pomp, reflecting the ideals of its postwar leaders and draws on both Soviet and traditional Korean design.

Dramatic, bizarre and monumental, Pyongyang’s buildings are designed as set pieces, giving its streets the appearance of stage sets. Noted for their resemblance to Wes Anderson film sets, interiors are fascinating for their pastels and complementary hues, over-the-top flourishes, and vintage looks.

The map’s photography was taken by architecture critic Oliver Wainright with the permission of the North Korean government. It captures Pyongyang in the way the military state wants the world to see it: neat, ordered and populated with middle-class city dwellers. The grim reality of life in the secretive state, which has a struggling economy, stays well hidden.

Take a look at Pyongyang’s most interesting spots.

These residential apartment blocks project an image of a modern, forward-thinking society. Built for the elite classes, and set beside a green-lined boulevard, their cylindrical and wavy rectangular structures are wrapped in bands that form balconies overlooking neat lawns.

The rocket-shaped diving tower in this monumental pool stadium features a strange invention – it houses a lift with a smoked glass wall that transport divers to the boards. Adding to the extravagant look is terrazzo flooring, mosaic walls, lavender walls and red seating.

A scaled-up stone statue of a seated Kim II Sung and a pink-hued mural of the Paektu volcanic mountain greet visitors to Pyongyang’s central library, which has capacity for 30 million books. Temple-like columns and a ceiling inspired by giwa (tile) roofs nod to traditional Korean architecture.

Formed of three wings that converge into a cone, the construction of this extraordinary, still-incomplete building began in 1987. The 1,000ft skyscraper – nicknamed the ‘hotel of doom’ for its looming presence – was a concrete shell until 2008 when it was given windows.

Covering 59,900 sq m – roughly the equivalent of 8 football pitches – with two theatres, this concrete behemoth has severe horizontal lines incongruously mixed with sci-fi elements such as the red, segmented windowed arch above its anonymous entrance.

This ellipsoid building features upper and lower sweeping arches, which don’t quite meet in the middle. In the gaps are a series of windows that light its interior. Its front exterior features tessellated rhombus tiles and a bronze plaque featuring an athlete above the porched entrance.

The trio of hands that form this patriotic concrete monument hold a hammer, sickle and paintbrush, symbolising a worker, farmer and intellectual, and are held together by a belt denoting unity. The 50-metres-high structure is set on a plaza used to hold mass dances.

These 20m statues, set in front of a mosaic mural of Paektu, the sacred mountain of revolution, commemorate deceased North Korean leaders Kim II-Sung and Kim Jong-ill. Made of bronze (originally meant to be gold leaf), visitors are expected to leave flowers and bow in front of them. 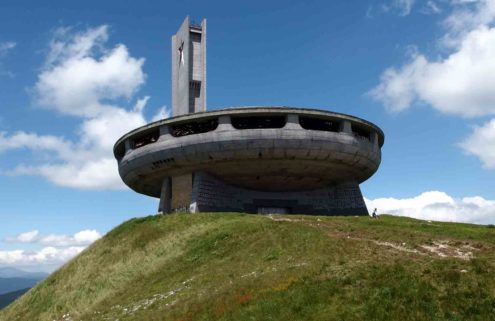 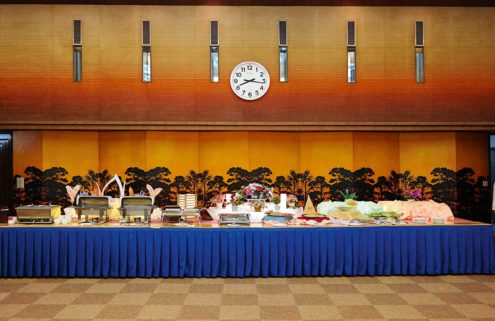 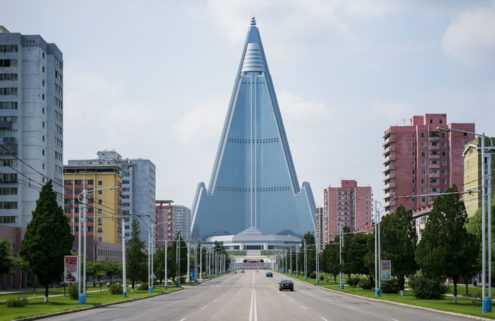