Karl Lagerfeld’s lavish Hamburg villa could be yours for €10m

Karl Lagerfeld’s former Hamburg villa has hit the market with a price tag that matches its opulent interiors.

The fashion designer bought Villa Jako – now listed for €10m via Engel & Völkers – in 1991, naming it after his longtime partner Jacques de Bascher, who died in 1989. He lived in the house in the suburb of Blankenese until 1998, when he declared: ‘It’s impossible to live on the Elbe. You spend all your time looking out at the river. You ended up becoming lazy.’

Lagerfeld may have owned homes around the world, but the neo-Classical Villa Jako was of special significance to the designer. He shot an advertising campaign on its columned terrace for his Lagerfeld Jako fragrance and featured the Hamburg property in his book, Ein Deutsches Haus (A German House).

The building was originally a single-storey dwelling, designed by Walther Baedeker in the 1920s, who later added a second storey. When Lagerfeld purchased it, he enlisted art conservator Renate Kant to restore it, and worked with French designer Andrée Putman on some of the interiors.

Symmetry is Villa Jako’s chief design feature. Visitors enter into a vestibule that opens onto a central atrium with a sunken water feature. Crowned by a glass dome, the atrium peels off to the kitchen on the west side and a Chinese salon on the east. It also leads straight ahead to the living room, spanning the breadth of the house, which has a coffered ceiling lined with gold leaf. Arched doorways open on to the garden.

On the upper floor, there are three bedrooms with adjoining bathrooms and a dressing room, grouped around an open gallery. A hallway is lined with bookshelves and velvet drapes. 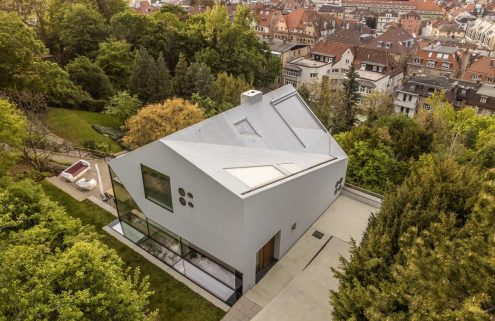 This brutalist Stuttgart home is all about the angles 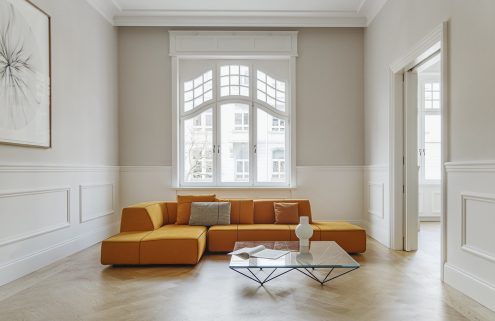 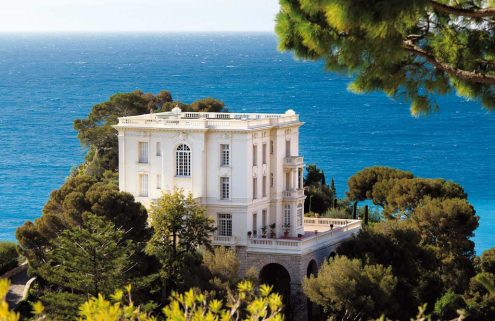