Serving up works by Hirst, Picasso and Banksy

Instagram’s world domination means it has never been more important for chefs to make their plates look like works of art. But this doesn’t mean they’ve taken their eyes off the wall. A longstanding tradition finds chef-proprietors and artists swapping food and drink for artworks to hang in the dining room.

It’s a mutually beneficial exchange: the artist gets fed and watered, while the restaurant’s walls are adorned and seats are filled with an interesting crowd, drawn by the spectacle as much as the eating. For chef and restaurateur Mark Hix, who features work by Tracey Emin and Damien Hirst on his walls, ‘food for art became a kind of currency, a way for me to collect art.’

Here are seven restaurants with art collections as good as their food.

Nick Jones’ new private member’s club – housed in a Grade I-listed former bank designed by Sir Edward Lutyens – has been making headlines since its opening in April, not least for The Vault 100 project. In response to The Ned’s position in the heart of London’s financial district, Soho House’s head of collections Kate Bryan has curated a permanent collection in The Vault bar, lounge and restaurant that challenges the gender inequality rife in both the financial and the art worlds. So, just as there are 93 men and just seven women heading up FTSE 100 companies, The Ned’s collection comprises artworks by seven men and 93 women working in London today, including Annie Kevans, Rachel Whiteread, Phoebe Collings-James and Phyllida Barlow. ‘The financial world is much less balanced than the art world,’ says Bryan. ‘By having such a ridiculously low number of men in the Vault 100 collection it highlights the imbalance of art world better.’

Taking over a heritage building on Hollywood Road, Bibo channels a mash-up of textures, flavours and contemporary art in a space conceived as the fictional headquarters of a French transport company. A menu of seasonal French cuisine is served among interiors that play on 1930s Parisian Art Deco – dusty blue accents, copper pipes and parquet floors – and hung with a vibrant collection of pieces by the likes of Jean-Michel Basquiat and Jeff Koons, as well as street artists Banksy, JR, Invader and Mr Brainwash.

La Colombe D’Or started out in 1920 as a humble café-bar in the hills above Nice, but over the past century it’s acquired a formidable gastronomic reputation and a prestigious art collection to match.

Its founder Paul Roux formed friendships with the likes of Léger, Braque, Matisse, Picasso, Calder and Miró, and his propensity to accept a painting in lieu of payment turned the hotel and restaurant into a treasure trove of masterpieces, which dot the hotel without ceremony. A sign erected by Roux still hangs over the door: ‘Here we lodge those on foot, on horseback or those with paintings.’ The traditional exchange of art for hospitality continues, with works by younger creatives occasionally being added to the collection.

Massimo Bottura’s passion for contemporary art plays out literally on the plate: ‘We use colour like Damien Hirst in his spin paintings,’ he says. The walls of his three Michelin-starred Modena restaurant are filled with artworks by Maurizio Cattelan, Gavin Turk, Ceal Floyer, Olafur Eliasson and Joseph Beuys, and he credits art as a principal inspiration for his wildly creative and colourful cooking. ‘Art reminds you to keep a small window open for everyday poetry, and when that happens, the most mundane object turns to gold,’ says Bottura.

Once a beerhall, this classic Swiss restaurant was opened in 1924 by Hulda Zumsteg and soon became the favourite haunt of the rich and famous, welcoming Coco Chanel, Albert Einstein and Sigmund Freud through the door. Legend has it that James Joyce wrote most of Ulysses sitting at table 17, a spot now marked by his portrait. The restaurant’s art collection is no less extraordinary than the stories that abound.

Hulda was known to swap food for artworks, and her son Gustav – famous for his masterful silk designs used by Yves Saint Laurent – was obsessed with art, building a priceless collection which he hung in the restaurant.

You don’t often get restaurant sequels, but this collaboration between Damien Hirst and Mark Hix finds the artist recreating his iconic Notting Hill restaurant Pharmacy in Vauxhall. The first iteration was shuttered in 2003, in part thanks to a dispute with the Royal Pharmaceutical Society of Great Britain, who were concerned that people would be confused by the name and try and buy their medicine there.

The reboot has kept the name and style – all works are by Hirst, including his butterfly Kaleidoscope paintings and, of course, the Medicine Cabinet series – but the new outpost has taken up a less confusing position within Hirst’s Newport Street Gallery.

This classic French restaurant in Upper Brook Street boasts Michelin-starred cuisine and a fine art offering of pieces by Picasso, Giacometti, Miro and Dali. Inaugurated by the French founders, brothers Albert and Michel Roux, the restaurant’s art collection has been expanded by the current chef and manager Michel Roux Jr. ‘The art is there for people to enjoy the experience, whether they like it or not’, he says. ‘It is their personal taste. It asks questions and feeds your mind, while we feed your body.’ 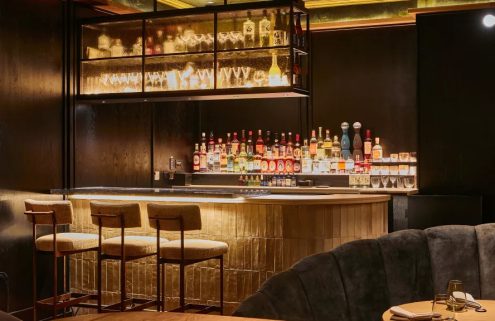 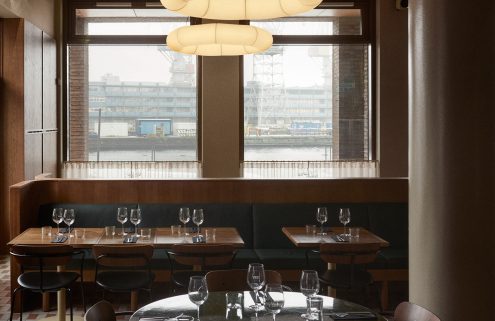 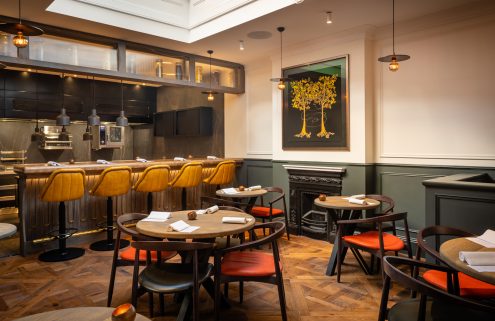 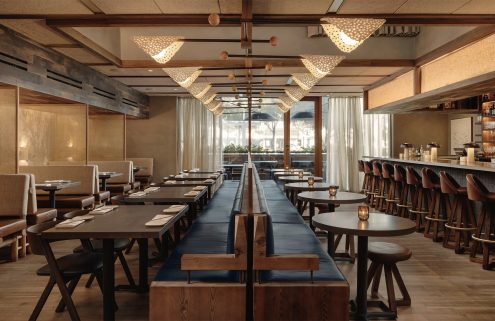