Gio Ponti is synonymous with midcentury Italian design, having created some of the country’s most beloved objects and buildings in a career spanning six decades. But it was often in private residencies where his most whimsical ideas came alive.

Phillips has recreated the lost interiors of Milanese apartment La Casa di Fantasia, which Ponti designed for the Lucano family in 1951, ahead of the auction of its interior collection on 21 March. Ponti tapped his creative contacts to decorate the postwar pad – which blurred elements of Italian Metaphysical and French Surrealist art – including Piero Fornasetti, who papered its walls with his illustrated designs of playing cards and books.

Some 30 lots are on display at Phillips’ Mayfair auction house until 21 March. These include the Lucano House’s ornately decorated ‘Rooms of Enchantment’ – comprising wall panels, six doors, three internal windows, and four wall lights – which has an estimate of £80,000 -£100,0000.

Ponti also designed furnishings in collaboration with artist Edina Altara, as well as a series of sculptural figurines inspired by La Commedia dell’arte, which were displayed inside the apartment (lot 309: estimate £15,000-£20,000).

Read next: Damien Hirst designs interiors for the worlds most expensive hotel room 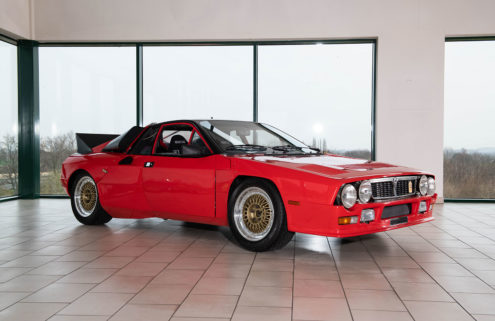