New television series Chernobyl tells the story of the 1986 nuclear disaster that occurred in Ukraine, then part of the former Soviet Union, and its devastating human cost.

Production designer Luke Hull – who is currently working on the Game of Thrones prequel – explains how the show’s aesthetic conveys the mood of the tragic event, whose impact continues to this day.

What visual research helped you form the aesthetic of the show?

We looked at photographs, some YouTube videos and a lot of street and life photography books from the time.

The other side of things was to find a reference that built a sense of the tone, dread and mood in the five episodes. I looked at the work of Alexander Gronsky – notable for his Russian landscape photography known for their quiet and abandoned qualities – and Gerd Ludwig – a photographer who documented the aftermath of the disaster – in the early stages and it helped to encapsulate a look.

A lot of inspiration, though, came from trips scouting for filming locations in Lithuania and Ukraine. A lot of Kyiv has not moved on from that period, which really helped build a visual language for the show.

What were the key design influences?
I wanted to avoid creating a 1980s period piece and instead make something that reflected the Soviet Union as a bubble in its own right. Kyiv and the interiors of the people’s homes we visited on the location scouting trips were influential and inspiring, regardless of whether we shot them as locations.

There are many documentary films on the Chernobyl clean-up, including real-time videos of the power plant’s roofs being cleared, which was a great literal reference.

We got excited early on about the idea of being able to create something visually striking that was also in a way ugly, using clashes of intense patterns, jarring colours, cheap materials, textured glass.

What were your primary historical references?
There are good written accounts by people affected by the disaster, which unlocked all sorts of details for us that made their way into the dressing of the show.

Many of the photographs taken by Igor Kostin [who took some of the first pictures of the disaster] are now owned by Getty and available to view online. And we met people who gave us first-hand accounts of the disaster, which was very useful.

Stark lighting and cloying green shades feature prominently. Where did this aesthetic come from?
While we were scouting for filming locations, we noticed interiors from that period felt very gloomy as if the Soviet Union did not have enough electricity to go around.

We were keen to use fluorescent lamps where possible, and avoid bulbs and shades, which could make it look cosy or nostalgic, to get a harsher, sickly look.
Early on the process, we were designing the power plant with a mix of green and orange lighting to contrast with the raging fire that occurred after the plant’s reactor exploded.

How were the themes linked to the disaster embedded into the sets?
It’s everywhere, the design is driven by the story. Every scene and set needed a layer of the theme and story in it.

Craig Mazin [creator/writer] and Johan Renck [director] were really clear about tone for each scene and what the story point for each scene was, so it became about how can we illustrate that, whether it was confusion, fear, isolation, panic or horror.

Johan and Craig’s decision to open the second episode on the ‘friendly atom’ mural in Kyiv really sums up where we are in the story at that point on so many levels. The mundane maze-like structure of stairs and endless corridors in the power plant are not only accurate but also illustrate the confusion in the aftermath of the explosion as well as the sense of being trapped.

The carpet mural, which was designed for Bryukhanov’s office, is a fun abstract piece that is representational of the propaganda artwork of the time and of also the fractured power plant.

The set created for the scenes in the second episode where divers were sent to the plant’s basement to prevent a second explosion features just pipes, in a maze-like form. It was not a realistic interpretation of the actual space, but it helped reflect the nightmare situation that the divers find themselves in.

How does the set design convey the sense that the Soviet Union was isolated and stuck in the past?
It was details like telephones and the hospital equipment, which were Victorian-looking in 1980s Soviet Union, especially in small towns. It was thinking of it as an analogue-age society, like the very bureaucratic system itself.

When I first saw the Ignalina power plant [a decommissioned RBMK power plant station in Lithuania], I was stunned at how basic it was, just pipes, corridors and stairwells, like a Victorian water pumping station with a fission core.

Vehicles were important too, as nowhere else were you seeing these kinds of cars at the time.

What parts were created from scratch?
We built the entire control room on a stage and then programmed it to run the sequence of events that night in the room, giving us more flexibility on the day of filming, and more control over lighting etc.

Medical and military props were sourced from Estonia, Latvia, Lithuania, Ukraine and Russia from private collectors and museums. Claire Levinson-Gendler [set decorator] and the prop master went on buying trips to Ukraine and found all sorts of goodies from local markets.

The damaged power plant was set in a half-built film studio in Lithuania. We took the shell of the structure and built inside it and added the base of Reactor Four and the destroyed pump room to the exterior, effectively creating a back lot. We also made the roofs and the mines here, too.

The road outside the building was made to look like it was connected to the exterior plant location at Ignalina, which allowed us to tell the story of the sheer scale of a power plant, which is spread across about 3km.

Pravieniškės stood in for Chernobyl town, as the Lithuanian town had grown up around a prison and had a great look and feel for what at that point was Chernobyl town, which had been empty for a while.

Our Pripyat was a combination of towns that had a similar look to and feel to what we felt the original Pripyat was like, a town that was designed and built quickly to service the power plant.

The main town we used to create outside spaces in Pripyat was called Fabjoniskes, and we turned its car parking lots into green public spaces with playgrounds and benches and red rose bushes, which was a feature of the town at the time.
The sets where the trial was held was a part-build, part-location dress at a school hall in Lithuania. We kept it close to the look of the real show trial, which, in reality, took place in Chernobyl town.

We wanted to create an atmosphere which told the story that they had been doing it for days and were bedded in. Jakob Ihre [director of photography] and Johan really liked the trial room in the Godfather Part II, which has a lot going on, and we wanted to include trailing wires, lamps, fans etc to bring it to life.

Read next: 7 North Korean scenes that look like film sets 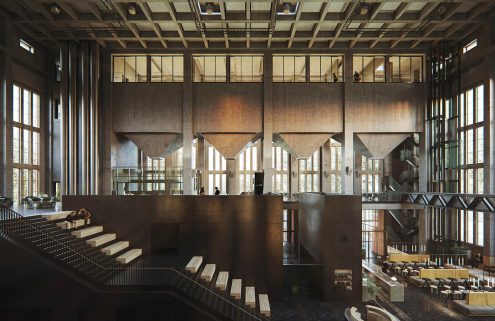