With its sleek, linear appearance and bold geometric ornamentation, Talisman House is a 1930s Art Deco jewel built initially as a garage and petrol station to service the playthings of London’s rising middle class.

In 2011, BDLA Architects converted the former garage on New King’s Road in the Chelsea Design Quarter into four sprawling lateral lofts, with this one spanning 5,000 light-filled square feet. The studio also designed its interior, with three bedrooms set around the perimeter of the London apartment to create a vast, open-plan living space.

Crittall windows span the width of the London property, which is listed with The Modern House for £6.5m, while glazed doors at the rear help funnel light through the recesses of the space. BLDA has cleverly concealed storage and shelving across the property and installed what the agent called a ‘network of movable walls’, which roll out from colossal oak doors to divide the 21-metre-long plan into smaller living spaces.

Polished concrete floors hark back to the building’s industrial origins, as do sliding steel doors which can separate off the kitchen, and provide privacy in the bathrooms. Glazed brickwork and steel pillars heighten the vibe, but the real devil’s in the detail, though: a set of kinetic bookshelves that can be closed off to create a library room via the turn of a handle adds excitement, while the 7.5-metre-master bedroom suite features floor to ceiling leather wardrobes and an en-suite with a steam room.

Peek inside the London property. 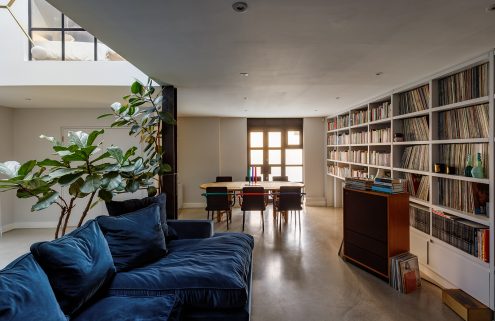