Property I by Malaika Byng

Gasholder conversions: a glimpse inside the show flat for the King’s Cross triplets

How do you make something industrial feel luxurious? This was the question put to Jonathan Tuckey when creating the interior architecture of one of London’s most unusual residential conversions: a trio of conjoined gas holders in King’s Cross.

‘There’s so much dynamism to the architecture,’ says Tuckey of the Siamese Triplets, as they are dubbed. ‘We wanted to celebrate the gasholders’ history and geometry while giving owners a sense of softness and domesticity. People need to feel like they’re in a home rather than a machine.’

The apartments – which can be previewed via a specially built show flat – will be shaped like cake slices cut from three cylinders: new structures that will sit within the gasholders’ 1867 cast iron guide frames.

Designed by Wilkinson Eyre Architects, these cylinders come in differing heights to echo the movement of the original gasholders, which would have risen up and down. A fourth cylindrical void will sit at their intersection, forming an open courtyard. Once complete in autumn 2017, the three structures will be clad in dark steel, with brass and bronze elements and perforated shutters.

So how has Tuckey taken cues from Wilkinson Eyre’s designs, while softening the apartments’ interiors?

‘We drew a lot of inspiration from 1920s power stations, particularly those in Eastern Europe,’ he explains. ‘Their architects got that positioning between industry, craft and luxury just right. Turbine wheels had jewel-like details and floors were made of terrazzo. We picked up on their materials, including brushed brass and darkened oak.’

The practice even convinced bathroom brand Vola to add brass handles to its Arne Jacobsen taps.

Tuckey was a canny choice of collaborator for King’s Cross developer, Argent. Since setting up his practice 16 years ago, he has made a career out of transforming historic buildings for modern uses, adding new wings to 19th century chapels, and making contemporary insertions within Modernist icons.

‘I think we resonated with Argent because we were happily constrained by the strong presence of the gasholders’ circular structures, rather than frustrated by them. It’s quite a mad idea to build inside three concentric rings,’ he says.

Not only that, but Argent also relocated the Grade II-listed cylinders – after having them restored by specialists in Yorkshire – to a brand new site beside Regent’s Canal, next to the recently converted Gasholder Park.

‘I think I would have been surprised if I’d heard any other developer was going to do that. But they’re reviving these structures with such commitment that they will be knock-out.’

Visitors will enter the gasholders via the newly minted Lewis Cubitt Square. A cantilevered canopy will lead into a soaring lobby. ‘You’ll arrive in this Guggenheim-like space where you’ll collect your post from what looks like Swiss bank vaults,’ says Tuckey.

In the midst of each gasholder will be covered atriums, circled by walkways, from which the apartments unfurl. Owners will be greeted by a wooden vestibule, akin to an ‘Orient Express train carriage,’ says Tuckey. Then the view will stretch out before them.

Bathrooms will sit at the tip of the cake slices, while living spaces will be positioned at the wide end, where they’ll be bathed in light from acres of glazing.

‘To show off the extraordinary geometry, we have given every apartment curved walls, which will be reflected in mirrors so that they appear to continue round,’ Tuckey explains. Apartments have deliberately not been aligned with the original cast iron columns, to ensure their intricate details are visible through windows, and reflected on the resin floors.

‘They’re a friendly figure in the corner of the room.’

Within the Siamese Triplets there will be 145 apartments – ranging from £810,000 to £3,525,000 – including nine double-height penthouses. Each of the radii of the cylinders is different, resulting in an infinite array of sizes and configurations.

‘That’s part of the beauty of the building,’ says Tuckey. ‘I think the gasholders will be filled with a healthy cross-section of age groups, because there is everything from studios to super lateral apartments and penthouses.’

A trip to the sales gallery – modelled on a slice of the middle-sized gasholder – reveals the scope of material palettes and configurations on offer. Here, a three-bedroom show flat has been kitted out with midcentury-style furniture and textured fabrics by designers Hudson & Mercer.

Meanwhile, the cylinders of the real deal – sited just a short walk further along the canal – are set to top out later this month.

Gasholder dwellers will have access to a gym, spa and cinema, as well as the communal rooftop garden atop one of the buildings, planted by Chelsea Flower Show gold medallist Dan Pearson. Penthouse residents, meanwhile, will have their own private gardens above the other two buildings, also by Pearson.

Reusing old structures like gasholders doesn’t come cheap, particularly ones of this scale. ‘It’s often more economical to knock a building down and start from scratch,’ Tuckey explains. ‘But for us, the richness of the layering is so attractive. Appropriating old structures for new uses gives buildings that amalgam of time.’

While knocking down the King’s Cross structures was never an option, thanks to their heritage listing, reviving historic buildings is a core part of Argent’s placemaking strategy for the 67-acre King’s Cross regeneration project. Here, coal drops are being turned into retail hubs, and a Victorian granary is now Central Saint Martins art school.

‘Refurbishing the gasholders at King’s Cross is possible and commercially viable because they sit within a large master plan,’ says Argent project director Tom Goodall. ‘Without these historic anchors, King’s Cross would not have its identity.’

With many more new buildings still to rise in this fresh urban precinct, the Gasholders are an important part of the tapestry of old and new. 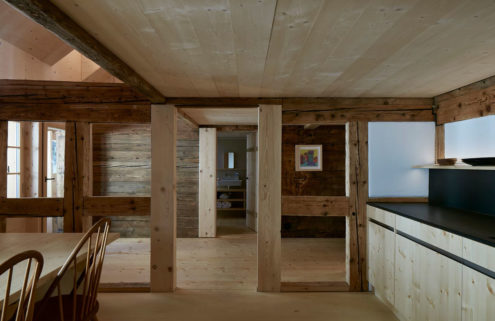