Ancient architecture is evoked inside Tel Aviv restaurant a, whose curving walls and delicate lighting evokes the mineral forms found inside an ancient cave.

All-female design and architecture practice Baranowitz & Goldberg worked in collaboration with Pitsou Kedem on the restaurant. It sits within the second-floor of the Azrieli-Sarona Tower, overlooking the Sarona neighbourhood, and is helmed by award-winning Israeli chef Yuval Ben-Neriah.

‘A is a destiny fulfilled; a space that was created to feel as if it has existed for centuries,’ says Sigal Baranowitz, co-founder and principal, Baranowitz & Goldberg

Interventions marry organic forms with the stark modern shell of the skyscraper, as evidenced by the vast curving wall that greets guests and gently guides them towards the dining room of a. This sense of ‘arrival’ pays homage to Japanese design traditions and represents a meeting of East and West, ancient and modern.

Lighting by Orly Avron Alkabes takes on a dramatic role, with a bespoke chandelier hanging above the bar made from thin pipes of TK aluminium set with small LEDs. Its pendant forms evoke primitive stalactites hanging from the ceiling while creating a dynamic lighting effect. Shelving is also backlit, heightening the ethereal glow of ‘artefacts’ along the arching wall.

This sense of history is heightened by textures: patinated turquoise copper cladding embellishes partitions in the space – a nod to the domed roofs of western cities – while the breezy monochrome shades of light grey recall the Mediterranean tones beyond the restaurant. 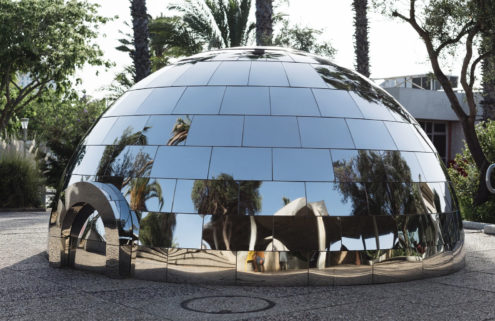 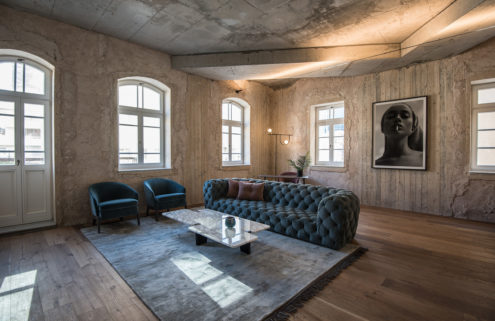 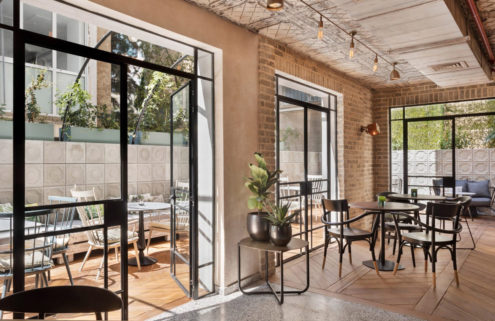 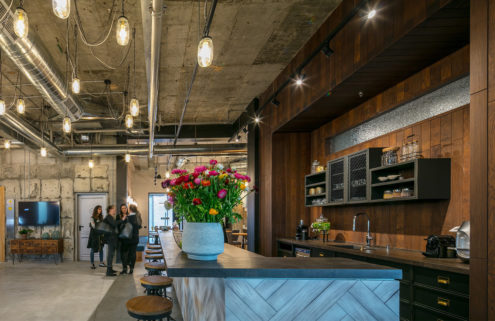