From salt mine to playground

Deep in the Transylvanian countryside lies an ancient salt mine dating back over two millennia.

Today Salina Turda has become an unlikely tourist attraction, with thousands of visitors descending its vertical shafts each year to play mini-golf, go bowling and row around its underground lake.

This submerged wonderland in Romania even has a healing centre for people with lung conditions.

British photographer Richard John Seymour recently travelled to Salina Turda in his quest to document human-altered landscapes. ‘Photographing this space was a challenge due to its sheer scale. Humans are put into perspective and the difference between nature and man-made features is blurred’.

Salina Turda filled the coffers of Hungarian kings and Habsburg emperors – especially during the 13th century, when salt was more valuable than gold – and sustained the local community for centuries.

Since mining activity ceased in 1932, it has had many lives. It was used as a shelter in World War II and has even served time as a cheese storage centre. Salina Turda reopened as a visitor attraction in 1992, bolstered by €6 million investment 16 years later, which cemented its adaptive reuse as a museum and theme park.

Two vast mines form the bulk of the attraction. Within these, a group of Romanian architects collaborated to create ferris wheels, spa treatment facilities and pods for sitting, gathering and shopping. There’s also an 80-seat amphitheatre for concerts, set against a decorative backdrop of stalactites and salt formations.

Visitors to these subterranean chambers are treated to halotherapy just by breathing in the pure air.

Salina Turda’s bell-shaped Theresa mine is its biggest, stretching 90 metres high. At its bottom is a salted lake filled by meteoric water that seeps through the ground. This provides one of the most popular attractions: the little Venice boat tour.

‘I am often drawn to contradiction in my work, where the heroic, idealistic, or epic meets mundane reality. Salina Turda embodies this idea particularly well. It is an undeniably beautiful historic monument of engineering and human endeavour, but it is now used as a theme park with ping pong tables, bowling, and boat rides.’

‘This juxtaposition raises questions about the value of architecture and space today, in relation to its historic value.’

Richard John Seymour will be exhibiting at the London Art Fair from 20-24 January 2016. 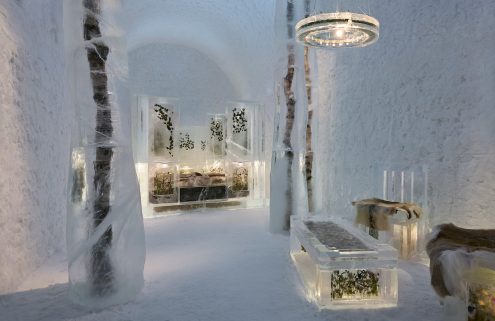