One of Sydney’s most famous modernist homes has come to market for the first time in 50 years.

American architects Walter Burley Griffin and Marion Mahony cut their teeth in the office of Frank Lloyd Wright before winning an international competition to design Australia’s new federal capital, Canberra, in 1914. After relocating to the other side of the world, the couple bought 650 prime acres of harbourfront land in Sydney, known as Castlecrag, on which they developed 14 avant-garde organically-inspired homes.

Fishwick House is the jewel in Castlecrag’s crown, built for British-born businessman Thomas Wilson Fishwick in 1929. It bears heavy influence from Frank Lloyd Wright, adapting to its rocky terrain with its wedge-shaped design and stone structure, built with materials excavated from the site.

Living spaces are set across two storeys, with rooms orientated around views of Middle Harbour, the ocean and lush bushland surrounding the Sydney property. (Its flat roof also doubles as a spectacular viewing terrace to watch boats coming and going across the harbour.)

Interiors feature a plethora of wood-framed windows, bursting with greenery from the gardens and exposed stone walls, with reddish timber floors running underfoot.

Modern House is listing the four-bedroom house, which underwent an award-winning restoration in 2000 under the guidance of Tropman & Tropman Architects. It remains one of Australia’s most intact and important Griffin buildings – a factor likely to command a premium.

Read next: Inside a converted Melbourne warehouse in Brunswick

An 1850s bank is ripe for conversion in Castlemaine, Victoria 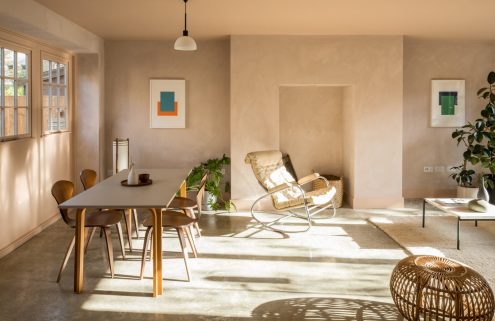