On the third floor of David Zwirner’s London gallery, two screens broadcast the video work BLKNWS by the artist Kahlil Joseph, featuring snippets of famous Black Americans in the style of a newsreel. A Miles Davis segment segues to a Richard Prior interview, into Oprah Winfrey, into Aretha Franklin.

The latter clip jumped out because the Franklin biopic, Respect, is still fresh in my mind and because it reminds us of a unique detail of Franklin’s life: she came from a comfortable, middle-class background – not without its challenges, but certainly free from the poverty and abuse that plagued other Black musical legends and became a biopic trope.

Noah Davis, the Los Angeles-based painter who died in 2015 at the age of 32 from a rare cancer of the heart, is the subject of David Zwirner’s post-Covid inaugural. And although he hailed from a younger generation, as a fellow artistic legend from a privileged Black background who devoted his life to amplifying the voices of his peers (including Kahlil Joseph, his brother), he bears comparison. Here on the third floor, the curator Helen Molesworth, a friend and professional champion of Davis’s, has recreated the ‘back room’ from Davis’s Underground Museum, the gallery he launched in South Central LA a decade ago. At a time when establishment gallerists are inviting more Black artists into the fold, many assume they all hail from the ‘hood’. Davis was one of the inviters, creator of a black establishment.

As London enters Frieze week and galleries assert their survival with their first post-lockdown shows, it’s clear everyone has been thinking hard about inclusivity and representation. At the main fair in Regents Park, the theme Elevating New Voices highlights a young, diverse network – including this year’s Frieze Artist Award recipient Sung Tieu – selected by young, diverse curators. Black and Asian artists dominate the small spaces of Mayfair, from Unit London and its new neighbour Pace to Thomas Dane, celebrating the work of Hurvin Anderson and Anthea Hamilton.

Davis’s voice is as unique as his contemporaries for his pursuit of figurative oil painting – unfashionable in the early Aughts when Americans had long since declared painting dead. Nevertheless, when he began showing in LA, everything sold. Immediately and privately. It’s why, says Molesworth, ‘his work doesn’t have a public life.’

Nobody but Molesworth could have curated this triumphant retrospective. The two bonded over their shared encyclopaedic knowledge of art history from their first meeting in the back room – a salon in the old, European sense of the word. His works, she says, build on that knowledge, drawing on 500 years of Western picture-making from Poussin and Rothko to Marlene Dumas, Luc Tuymans and Fairfield Porter. ‘If you see allusions in his paintings, it’s because they’re there,’ says Molesworth. ‘He really disarmed me with his love of art, and he felt the importance of that history in the present.’

Downstairs is a selection from the hundreds of paintings in Davis’s oeuvre, distinguished by their Picasso blues and the warm colour pops of domestic interiors and architecture. His colour shifts play to the emotional intensity. They speak to the jumble of eras and styles evoked in the works. Aggressive red and orange set the scene in Bad Boy For Life (2007), a portrait of an exasperated mother spanking her shame-faced boy. Dusky purples and greens enhance the magical realism of his Pueblo del Rio series (2014), where dancers perform Degas arabesques, and a pianist plays on a baby grand in front of an LA housing project designed in 1940 by Richard Neutra with prominent Black architect Paul Williams.

If it’s not immediately obvious, Davis’s dark sense of humour emerges gradually. Molesworth calls him a Dadaist and Surrealist by trade. After failing to get permission to show the originals, he once filled the Underground Museum with his own fakes of work by Jeff Koons and Marcel Duchamp. Neutra, of course, is the architectural luminary we all know today – not Williams, who taught himself to sketch upside down because he was forbidden to sit alongside his white clients. 40 Acres and a Unicorn (2007) explores the liminal space between Reconstruction and reality – the title refers to the ’40 acres and a mule’, promised as reparations for slavery after the Civil War.

You can discuss this on the third floor, in Davis’s reproduction salon. The ‘vibe’, says Molesworth, is all Davis, and gatherings were his goal.

‘That’s art,’ says Molesworth. ‘Its fundamental role is to allow you to find one another, find your tribe.’

Must-see installations at Frieze London – and beyond 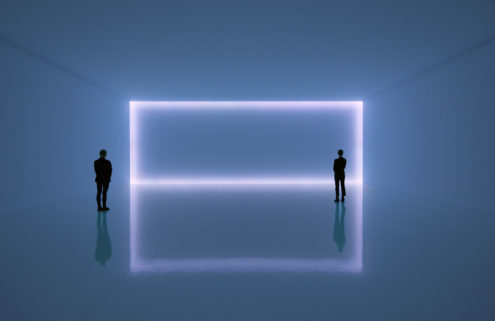