At work with Squire & Partners: inside their radical new Brixton HQ 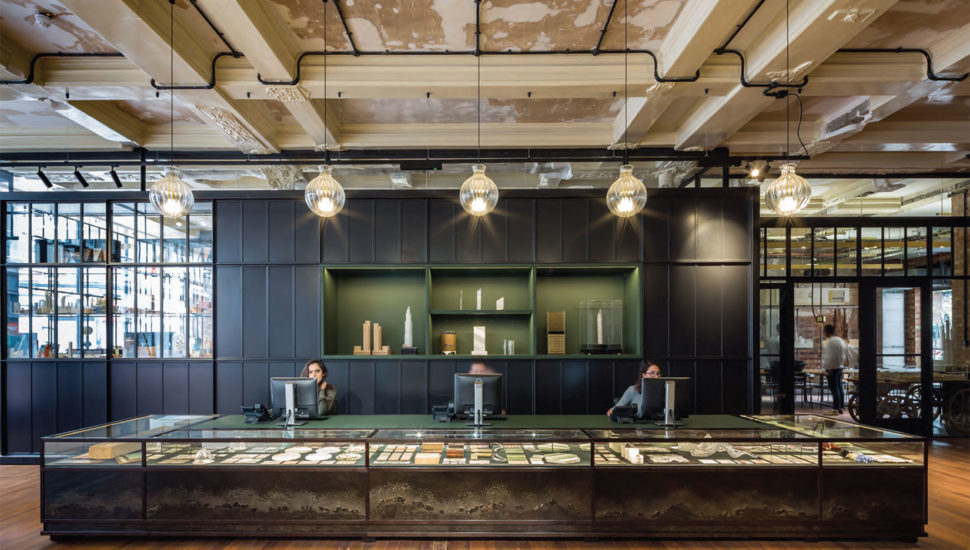 Graffiti and chipped plaster still line the walls of Squire & Partners’ former department store – remnants from its days as squat den. But that’s all part of the ‘poetry of decay’ inside this raw beauty in London’s Brixton.

The architecture practice has spent two years bringing the Edwardian building back from the brink. Built in 1906 as an annex to the Bon Marché store across the road, Toplin House is now a very modern breed of HQ for the firm, encompassing events spaces, a rooftop restaurant and a café for Kaboola Kitchen on ground level.

‘It’s more than just our office, it’s a cultural hub of sorts,’ says senior partner, Michael Squire. ‘That’s why we’ve kept the name The Department Store because it’s a group of different activities.’

‘The original chevron mahogany floors were one of the most special things we found,’ says Squire. ‘We took the decision very early on not to disturb them, resisting the temptation to slice them with chases and stick wires into them.’

One of their main interventions to the 6,147 sqm building was to create a series of voids at its heart. These create dramatic volumes and provide vistas through to different levels, ‘connecting the different happenings within our office,’ Squire adds.

But the building’s crowning glory is its vaulted rooftop restaurant, where inspiration would never run dry during a lunchtime meeting.

Bespoke elements abound throughout The Department Store, such as the handmade rugs featuring architectural patterns by Eley Kishimoto inspired by the building. A giant reception desk modelled on a haberdashery display greets visitors, created in collaboration with Interior iD and artists Based Upon.

Even the toilets are things of beauty – complete with digitally patterned plywood tiles, trimmed in brass.

Squire & Partners are taking pains to embed The Department Store in the local neighbourhood. Their model shop animates the street level, giving locals glimpses into their creative processes, and the firm is also welcoming creative enterprises into the building and adjoining structures. Local record store Pure Vinyl – founded by lifelong Brixton resident Claudia Wilson – has just moved into the building.

Read next: 17 spectacular architects’ homes you can visit