Interiors I by Trish Lorenz

Cofounder Rohan Silva predicts the future of the workplace

‘We want to encourage serendipitous meetings and the clustering of different types of business,’ says Second Home co-founder Rohan Silva. ‘That’s how we believe creativity and innovation happens.’

The tech entrepreneur has applied this mantra to two spaces in London so far, and now he’s exporting it to Portugal. Second Home Lisboa has just opened inside the storied 19th-century Mercado da Ribeira.

Spanish practice SelgasCano – who also designed Second Home’s 25,000 sq ft east London space, as well as its bookshop Libreria – created the hub’s colourful interiors, which have been treated to a healthy dose of Yves Klein Blue and a plethora of plants.

Second Home bills itself as the future of the workspace, offering up in-house restaurants, cultural programming and yoga and meditation spaces to its diverse mix of tech and creative sector entrepreneurs. We spoke to Rohan Silva about the move to the Portuguese capital, what makes Second Home Lisboa tick and how the workplace is changing.

Why did you choose to expand to Lisbon?
Rohan Silva: It was a business decision but it was a mix of head and heart. I first visited Lisbon three years ago and really liked it here. It reminds me of east London in 2010, before the Tech City explosion. There is energy, creativity and a real mix of businesses, from venture capitalists to film-makers, fashion designers and creative agencies. It’s much more than just tech. And that suits the Second Home profile; we aim to curate a mix of different industries in the space.

Tell us about the Lisbon space.
RS: Second Home Lisboa is on top of the city’s 19th century market hall and our offices overlook the fruit and vegetable vendors below. The building is an open, vaulting space and our architects, Spanish firm Selgas Cano, have respected that. There is a lot of natural light flooding in and we’ve used more than 1,000 plants and trees to demarcate spaces inside and to create privacy.

This is a very eco-friendly building, too, with features like natural ventilation. There will be a well being space, an in-house restaurant headed up by Spanish chef Francis Paniego and a cultural programme of talks and so on.

Lisbon shares the same architects and some of the same features as the London space, but in what ways is it different from the London venue?
RS: In some small details it’s different – rather than the bookshop we have in London, in Lisbon we will have a lending library for members, with books in English and Portuguese. And the physicality of the space is very different to London too. But overall the intent is absolutely the same.

Looking at the way we work more generally, is co-working as a concept still relevant today?
RS: Co-working is absolutely still relevant. Desk spaces are a utility and an increasingly important one. Freelance workers are a very fast growing segment of the economy; in the US, 20 per cent of the workforce is already freelance or self-employed and in the UK there will be more freelancers than public servants by 2018. There aren’t enough spaces for people working this way; there need to be a lot more.

Where does Second Home sit within the coworking concept?
RS: We don’t consider ourselves a coworking space because, generally, as long as you pay for a desk you can work one of these. We curate the companies that work at Second Home and our focus is squarely on creativity, innovation and how to support it and make it happen. I think we are a new species of thing: a creative accelerator.

What do you think the workplace will look like in 10 years time?
RS: I think some of the things we are doing at Second Home now will become more common. Cultural programming for instance: people want to be inspired in the place where they work. There’ll be more of an emphasis on well-being, spaces and time for yoga and meditation. And physical design is important too; a building can really shape us. Our architects look at evolutionary psychology – which considers how humans adapt to the changing the world – and biophilia, which studies the affinity people have with the natural world, and create buildings that mimic and take aspects from nature. There are no straight lines in our buildings and lots of natural light, for example. I think we’ll see more of that in future, a focus on nature.

Other than Lisbon, what’s next for Second Home?
RS: Our next project is a family-friendly space opening in London Fields in spring 2017. It will have facilities geared at people with young children, including everything from a bilingual English Mandarin nursery to spaces for kids to park their scooters. That’s another trend I think we’ll see a lot more of in the future – child-friendly work spaces.

We’re also planning to open another space in Holland Park later in 2017, in John Cowan’s former photography studio. It’s the space that was used in the 1960s movie Blow Up and we just fell in love with the building. Also, there’s a bit of an imbalance in London at the moment. All cultural energy has moved to the east at the expense of the west. We’re looking to address that, albeit in a small way.

Read next: Inside Lisbon’s tech and co-working scene 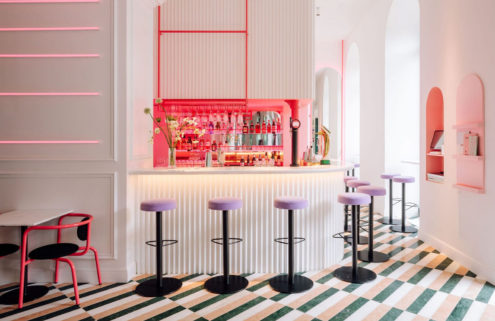