Reclaimed by the jungle

This abandoned hotel in the highland jungles of Bali might look like an ancient ruin, but it’s actually the remnant of a thoroughly modern saga…

‘Mystery surrounds the hotel’s construction as well as its owner’s origin,’ says Parisian photographer Romain Veillon, who travelled to the spot near Bedugul, around 50 km north Denpasar, for his series Ghost Hotel.

‘Some say that the real estate developer was cursed because of his corrupt projects, others that all of the guests suddenly disappeared one night and that their ghosts came back to haunt the hotel,’ he speculates. ‘Most likely, it was an abandoned investment project of Tommy Suharto.’

Tommy Suharto is the son of Indonesia’s former dictator, General Suharto. He was sent to prison in 2002 for the assassination of an Indonesian Supreme Court judge who found him guilty of corruption. PI Bedugul Taman Rekreasi Hotel and Resort, as the hotel was known, was abandoned and left to decay on the cusp of its completion.

A local guide dropped Veillon at its gates, and he spent a day exploring its empty halls and rooms, and ornamental gardens. Taman Rekreasi’s lobby is still decked with decorative floor tiles and sculptures, as though waiting for revival.

‘Fog swallowed the hotel in just a few minutes,’ Veillon says. ‘I took a few last shots while it was still possible – not long after, you couldn’t even see five steps in front of you’

For Veillon, these fog-covered images are testament to the power of nature – a recurring theme throughout his work.

He adds: ’You have to understand a place’s history if you want to be able to photograph it and transpose what you felt there.’

Read next: Andrea Mottinelli brings buildings to life with his playful cinemagraphs 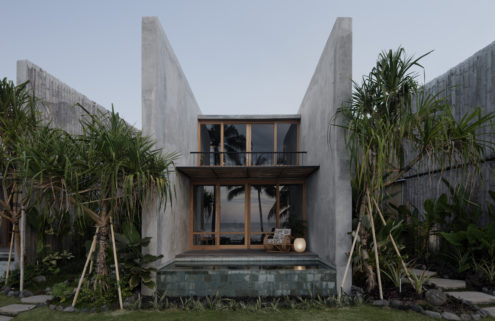