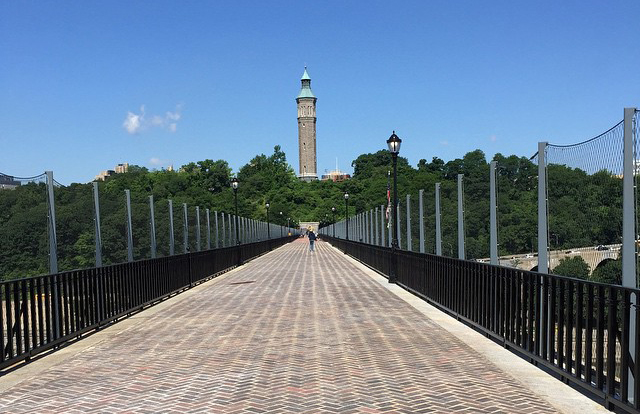 The High Bridge has been closed since 1970
Source: Argenis

Pedestrians can stroll over a bridge connecting the Bronx and Manhattan for the first time in 45 years.

The 1,450-ft-long High Bridge – which began life as the Croton Aqueduct in 1848 – closed down in 1970 after a decline in public use. But a three-year, $61.8 million restoration spearheaded by the New York City’s Department of Design & Construction has returned the 123-ft-high structure to its former glory.

‘Downtown may have the High Line, but uptown we have the High Bridge,’ Bronx borough president Ruben Diaz Jr told the New York Times.

Updates to the bridge, built to direct water to a burgeoning New York in the 19th century, include a restored brick walkway, re-mortared stone joints and a repainted steel frame. Its old railings have been preserved, while a new fence has been installed to ensure the safety of pedestrians and cyclists crossing the Harlem River below.

‘Back in its heyday, this was the place to go and enjoy and recreate,’ added Jennifer Hoppa, the City Parks Department’s administrator for northern Manhattan.

High Bridge’s closure 45 years ago was seen as a sign of the city’s wider decline during the 1970s. But its reopening is set to revitalise the surrounding areas – particularly neighbourhoods in the Bronx and Washington Heights connected by the bridge. The 130-acre Highbridge Park in the latter, for example, has already received a multi-million dollar upgrade in anticipation of increasing visitors.

‘The High Bridge represents a larger commitment of the Bloomberg administration: working to give a rebirth to areas of the city that were once symbols of urban decay and New York City’s decline,’ wrote Adrian Benepe, the former parks commissioner under Bloomberg, in the New York Observer.