Interiors, News I by Agnish Ray

Spanish entrepreneurs Felipe Turell and Javier Antequera have opened a new dining establishment geared towards positive social and environmental impact, built in what was once Madrid’s Espronceda Theatre.

Wood recovered from the previous site was used to build Enzo Mari-inspired chairs, while benches and tables were fashioned out of rubble from the demolition. Second-hand industrial street lights hang from above, rewired with environmentally friendly LED bulbs.

The outdoor dining space, with a retractable roof overhead, occupies the former theatre’s auditorium area. Valencian orange trees evoke the sense of a Moorish patio, while creepers sprouting from soil that lines the edges of the hall will cover the walls in greenery within a couple of years.

Cooling systems using water and terracotta, a material abundant in Madrid, provide relief from the summer heat at minimal energy cost. In winter, underfloor heating reuses the energy generated by the kitchen.

Socially conscious leisure reigns at Mo de Movimiento, with over 50% of the Madrid restaurant’s staff employed through charities representing people at risk of social exclusion. Nearly everything on the menu is from small, local suppliers – from the cherry tomatoes and avocados blended in the salmorejo to the flour used in the pizza dough. 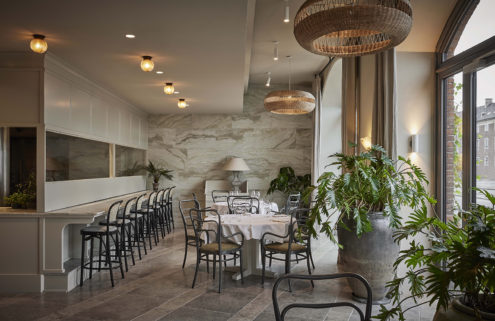