Architecture, News I by Clare Dowdy

Decked out in geometric patterns

South London’s answer to the Serpentine Pavilion is a multi-hued ‘party hat’.

DPG director Jennifer Scott describes the louvred pavilion as ‘a party hat sitting on columns that look like elephants’ feet’.

The pavilion’s task is to reach a more diverse audience. Architect Dingle Price’s interpretation of that was ‘to bring the European and African continents together’. He cites the big West African community on nearby Rye Lane in Peckham, where Pricegore has its studio – a gritty contrast to rarified Dulwich.

He says: ’The continents have two key architectural commonalities, using geometric patterns to adorn buildings, and raising precious buildings (such as dovecots and grain stores) on massive feet.’

The temporary pavilion’s simple materials include timber slats and columns made from drainage channels. For the geometric pattern, British-Nigerian Ilori drew on the fabric stalls of Lagos’ Balogun Market. Meanwhile, the crenellations around the top ‘were inspired by the decorative façade of a beautiful mosque in Northern Nigeria. They give it a palatial feel,’ Ilori adds. 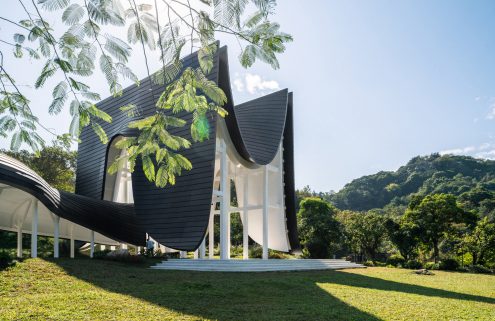