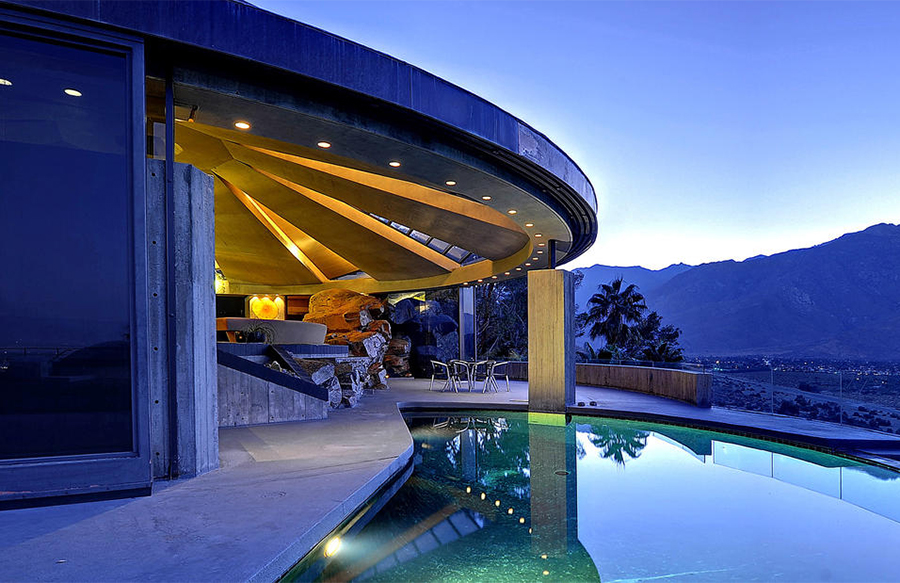 A John Lautner-designed Modernist lair that appeared in James Bond film Diamonds Are Forever is available to buy for $10.495 million.

Built in 1969 for interior designer Arthur Elrod, the domed, concrete structure in Palm Springs incorporates rock formations from the hillside it sits on. It is best known as the place where 007 gets a beating from two fly-kicking women in the classic Bond flick.

Sir Ken Adam, the late production designer whose work is synonymous with the James Bond franchise, described the home as ‘absolutely right for the film’.

‘It was a reinforced concrete structure, very modern and fabulous,’ he explained. ‘I said, “this is as though I designed it. I don’t have to do anything.’”

Elrod gave Lautner – an apprentice of Frank Lloyd Wright – free rein when it came to the design, asking the architect to ‘Give me what you think I should have on this lot.’

The circular domed living area forms the centrepiece of the five-bedroom, 8,900 sq ft property and features curved glass walls that open onto a swimming pool and terrace, providing views of the Coachella Valley.

A spiral staircase leads to a separate guesthouse, which comes with a gym.

Elrod House isn’t the only John Lautner-designed home on the market. The Bob & Dolores Hope Estate, also in Palm Springs, has been available to buy since last year for $24.999 million.