20 May 2021: Brutalist landmark 180 Studios, 180 The Strand reopens to the public following months of lockdown with an energetic new show by Ryoji Ikeda that ushers the London culture hub into this brave new world.

RYOJI IKEDA is curated and presented by The Vinyl Factory and Fact in collaboration with Audemars Piguet Contemporary and sees 12 of Ikeda’s audio-visual artworks set the building’s concrete spaces aglow with blinking strobe lights and mesmerising soundscapes.

The hypnotic combination feels particularly apt as the capital adjusts to the ‘new normal’ of not-quite-post-pandemic life. Visitors to the ticketed show must adhere to strict COVID-19 protocols designed to limit traffic. An unexpected upside is that the artworks take on added surrealness due to the isolation of experience.

Ikeda – who has been obsessive exploring how data can be shaped to create an audio-visual language for over 16 years – is debuting the final part of his data-verse trilogy as part of the show. Dubbed data-verse 3, it has been five years in the making and is the apex of the exhibition, displayed alongside parts 1 and 2.

‘Three screens will be showing at the same time for the first time, and probably for the last time, so this is a really special occasion,’ says Ikeda.

Commissioned by Audemars Piguet Contemporary in 2015, data-verse distils tens of thousands of hours of scientific research by Nasa and the Human Genome Project into DNA sequences, galactic coordinates, atomic structure and quantum physics into a mind-bending audiovisual presentation. The result promises to stagger and thrill and is a timely reminder of the scale of the universe – and our tiny place in it. 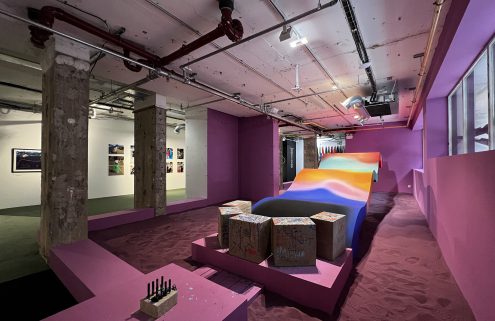