How I work: artist Francisco Vidal

The Lisbon-born artist, who is of Angolan and Cape Verdean descent, views himself as a machine and his studio as a workshop. It’s inside this cavernous space that he produced the vivid machete paintings – referencing the cotton region of Baixa de Cassanje and the bloody events that kick-started Angola’s fight for political freedom – that form the backbone of his upcoming show: Workshop Maianga Mutamba.

Ahead of the exhibition at London’s Tiwani Contemporary, we thought it fitting to see where his works were ‘manufactured’. Vidal – who represented Angola at this year’s Venice Biennale – led us on a tour of his studio.

Tell us about the history of the building?
Francisco Vidal: First it was a foundry – they made ovens, freezers and metal appliances here. When the colonial war in Angola started, they began making shells for napalm bombs. They did that through the 1960s and 70s.

I actually grew up in Oeiras, and when I was a kid in the 1980s here, the factory was no longer working. Instead it was a skate park and we’d play there. Hip hop, punk and hardcore [artists] would do concerts… It was a cultural space.

Is there a deliberate parallel between the themes of your work – the artist as a worker, and Angola’s relationship with Portugal – and your own studio space?
Definitely. The first time I painted in this space was 10 years ago: I was at school, I was 26 and I discovered that bombs and arms were made here for the colonial war. I asked my mother and father about the war, I focused on these questions and this trauma and I incorporated those ideas into my work.

Now I’m here again, at the same factory, and I know I had this line of thinking because of the space.

But the most important thing is that this vast, beautiful space could be really productive. It could be studios for artists and a school for kids from the city. We’re in peace now, and that is more important than its past…

How do you use the physical characteristics of the factory to shape your work?
Firstly, it’s shaped my thinking: I think in series, as a line of production. I use the ‘process’ of the building, I even number my paintings, as you’ll see.

The factory is a huge space and I’m learning to use its scale and physical properties. The light here is particularly beautiful, and the floor space is enormous.

The ceilings are pretty incredible…
They are. I use them as a sort of ‘suspended canvas’. I’m learning to ‘scale-up’ my work.

Tell us about your gallery-in-a-box, ‘U.topia Luanda Machine’.
Every culture can understand a cube. I made these cubes so I can put my studio inside them and ship it – but they can also be reconfigured to make a wall or table [or pyramid, below]. They can create a gallery space.

The Utopia part references the ‘dream’ studio – you can export yourself to another location and work. It also works like a machine: it’s a toolkit [for mass-producing] screen-prints, and it thinks about the industrial revolution still to happen in Angola.

In Luanda we need art schools, galleries and museums – [‘U.topia Luanda Machine’] produces that because when you can make walls, you can create these spaces.

What’s the best thing about your studio?
Its potential. What its future can be – it could be an art school, like the Tate, which was an industrial space too. That’s the best part of working here, thinking how it could become something constructive to society. We’re working on trying to make it into a museum or a cultural space. We’d love to do that. 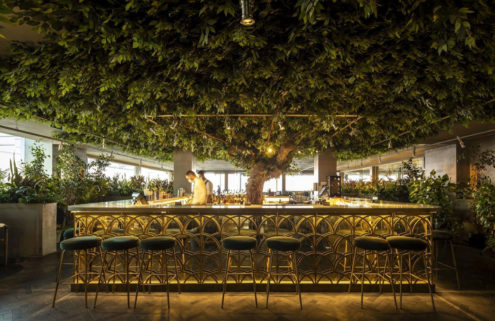