From Luhrmann to Lynch: how film directors do interior design

The Great Gatsby had just screened in Cannes when property mogul Alan Faena first asked its director Baz Luhrmann to turn his hand to interior design.

Faena had recently bought Miami’s 1940s Saxony Hotel and wanted to restore it to its former glory.

Luhrmann was a fitting choice of collaborator for a man masterminding the Gatsby-esque, $1 billion transformation of an entire neighbourhood of the city. The Faena Hotel Miami Beach – as it is now called – soft launched last week and will soon be joined by a residential complex, galleries and public plaza, collectively known as the Faena District.

‘[Faena] does in reality what we tend to only do in film,’ Luhrmann recently told Travel + Leisure.

The director worked with his costume designer wife Catherine Martin on the creative vision for the hotel, alongside Faena and his wife Ximena Caminos. ‘Baz edited the architecture, like film,’ said Caminos to The Hollywood Reporter. ‘We altered the architecture based on his “camera”.’

Luhrmann is the latest in a trio of film titans who have recently designed real-life ‘sets’. Here, we venture inside the Faena Hotel, as well as Wes Anderson’s Bar Luce in Milan and David Lynch’s Silencio club in Paris. 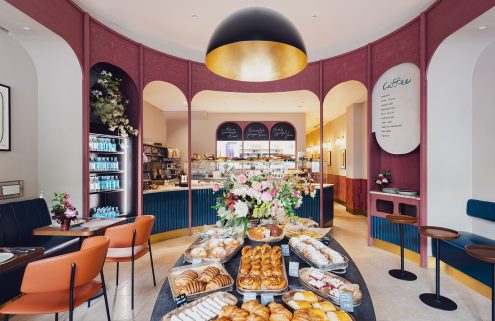