‘High Rise’ trailer is shot like a developer’s promo

The trailer for Ben Wheatley’s new film High Rise is shot like a promo video for a luxury London tower.

‘Ever thought there could be a better way to live, free from the shackles of the old, tired world?’ asks the film – based on JG Ballard’s novel of the same name.

You’ll find an apartment for every taste in this tower, described as the ‘culmination of a lifetime’s work for esteemed architect Anthony Royal’. Have a browse of his website – which flashes up at the trailer’s end – and you can chose from ‘homely’ to ‘modern’ or ‘splendour’.

In fact, there’s almost no reason to leave this building, equipped with ‘every modern convenience’, says the narrator, actor Tom Hiddleston.

But, as with the 1975 Ballard book, things quickly take a dystopian turn. Lifts break, lights flicker and all is not quite what it seems.

They hint at the disorder to follow as residents become isolated from the outside world.

High Rise’s trailer has echoes of an advert by London developer Redrow launched early this year – and subsequently pulled. Shot like a film preview, it told of a young man rising up the career ladder and finally achieving his dream: a luxury apartment in the sky.

Said the narrator: ‘They say nothing comes easy. But if it was easy, then it wouldn’t feel as good.’

Redrow’s film was canned after being likened to American Psycho on twitter.

As new towers spring up across London’s skyline, the timing of High Rise is all the more pertinent. You can take the full tour of its luxury apartments when the film hits cinemas in March 2016. 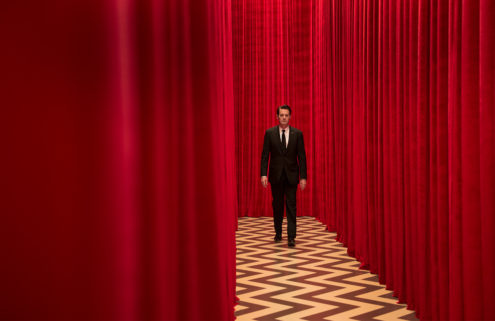