Architecture, News I by Anthony Paletta

Governors Island reopens today in New York, and it’s added to its unique collection of Manhattan views with the creation of four peaks on its south side.

The Hills is the latest phase in the island’s development, comprising four elevations between 25 and 70 feet high that naturally accentuate the island’s existing historic charms and offer new vistas of the Financial District in the distance.

Formerly an army base in the centre of New York harbour, Governors Island was donated to the City in 2003. Since then, it has undergone gradual conversion to public use, with the majority of its space given over to parkland.

The island’s shape has been compared to an ice cream cone, consisting of the original island to the north and subsequent landfill to the south. The visitor’s experience of the ‘dessert’ for most of its years was that of a picky eater: the scoop was delicious but the cone largely and rightly ignored.

Older portions of the island include fortifications dating from 1794 and 1811 as well as officers’ homes and other structures from the 1870s-1900s. Architecture firm McKim, Mead and White – known for buildings such as the James Farley Post Office in Manhattan – master-planned the settlement.

For a military base its ambience is improbably turn-of-the-century American collegiate in style. In following decades however, this gave way to a drab landscape of cheaper structures on the island.

Since 2014 this has been changing, most dramatically with this latest addition.

Rotterdam firm West 8 has been supervising the development of the south side, which has seen around 830 trees of 32 varieties and over 40,000 shrubs planted on the island.

The creation of the hills, while an attraction in their own right, was also crucial for the success of this planting. West 8 explains: ‘The entire grove is lifted topographically from existing grade in anticipation of sea level rise, and to [protect] the tree roots from the brackish groundwater below.’

Gaps between the hills have been conceived to alternately conceal and emphasise views of the Statue of Liberty, Manhattan and other surrounding landmarks. The planting has been designed to enhance this effect as it matures.

The new landscape ‘incorporates a philosophy of play,’ says Leslie Koch, President of the Trust for Governors Island. The longest slide in the city inhabits Slide Hill, while Discovery Hill features a hut-like concrete sculpture by Rachel Whiteread titled ‘Cabin’.

Outlook Hill, the tallest of the four slopes, includes a path made of granite blocks from the island’s former seawall. Its summit offers a rare natural peak in the city from which to view sunrise and sunset.

Read next: the world’s first underground park is coming to New York 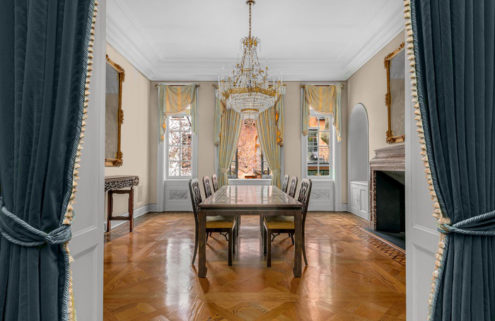 Manhattan’s ‘most photographed townhouse’ is for sale 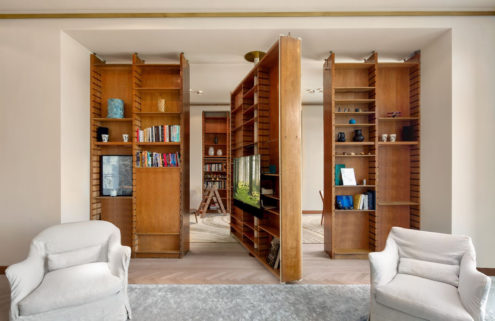 East Side apartment by Axel Vervoordt asks for $14.9m