Florence gets a new Gucci eatery by Massimo Bottura

The fashion pack at Pitti Uomo can refuel in style at Massimo Bottura’s new Gucci Osteria, inside the freshly opened Gucci Garden Galleria.

Bottura was tapped by Gucci creative director Alessandro Michele to mastermind the restaurant on the ground floor of the Florentine building. The historic Palazzo della Mercanzia has housed the Gucci Museo since 2011, but it has been reborn as a green-tinged oasis, incorporating Bottura’s eatery, a store and exhibition rooms curated by Maria Luisa Frisa.

‘The restaurant is a reminder that Florence has always been a centre of cultural exchange, particularly during the Renaissance,’ says the Italian chef, whose Modena restaurant Osteria Francescana has earned him three Michelin stars.

Gucci Osteria’s design channels this influence: lines from a 15th-century carnival song, ‘Canzona de’ sette pianeti’, by Lorenzo de’ Medici are written in gold script on the restaurant’s green walls, which nod to Gucci Garden’s biophilic theme. Chairs and booths have been upholstered in verdant velvet, and walls hung with carved stone tablets.

Bottura’s menu gives an international twist to traditional Italian dishes, inspired by his adventures. ‘Travelling the world, our kitchen interacts with everything we see, hear and taste,’ says Bottura.

Also on the ground floor is a bazaar-like retail store, which sells goods designed exclusively for Gucci Garden, from shoes and handbags to a silk jacket with the Gucci Garden gothic script. Its rooms feature burnt yellow plaster walls and hang-aged marble tiles. The Palazzo’s stone pillars and merchants’ coats of arms are also on show.

Explains curator Maria Luisa Frisa: ‘In the rooms entitled De Rerum Natura, for example, we see Gucci’s passion for flora and fauna expressed through vintage and current garments, silver animal statuettes made by the firm in the Fifties and original artwork by Vittorio Accornero, who was commissioned to create the Gucci Flora print in 1966.’

Gucci Garden Galleria is the latest redevelopment venture from the fashion house, which converted a Milanese aeronautical factory into its 35,000 sq m HQ in 2016. 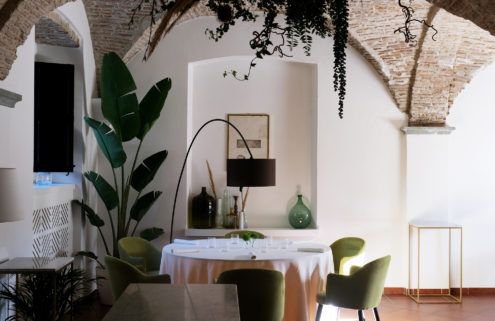 Berlin bar and restaurant Kink is ready to serve you now