During Australia’s postwar period, domestic tourism boomed thanks to the rising popularity of the car, which enabled people to travel across the country.

Due to the vast distances between destinations, pitstops were an essential part of trips, creating demand for accommodation along popular routes. An American concept provided the answer: the roadside motel.

From the 1950s to the 1980s, the midcentury motel was part of the Australian holiday experience, according to the comedian and design enthusiast Tim Ross, whose new pictorial book, Motel – Images of Australia on Holidays, celebrates the roadside motel of yesteryear.

Says Ross: ‘In the postwar period we were embracing modernism, and the motel was a shiny symbol of Americana that we could not resist. It helped us feel like we were a modern progressive nation.’

Ross says he stayed in motels during childhood family holidays and has been a fan since then. ‘I loved the architecture, the complimentary biscuits and the compact nature of a little room that was ours for the night. When I was in a band, we used to make toasted sandwiches with the in-room clothes iron.’

Early versions of Australian motels were copies of American designs but later on, Australian architects developed their own style. They attracted vacationing families, with alluring features such as pools, colour televisions, room-delivered breakfasts and parking at the door.

‘Motel – Images of Australia on Holidays’ is published by Modernister Books 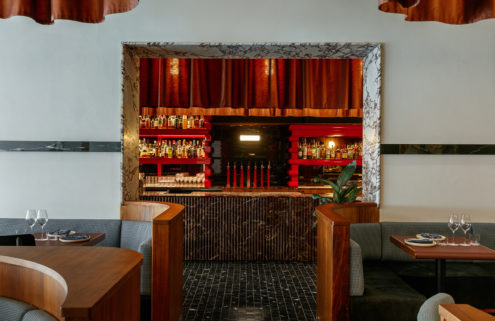