The Lombardy home of the late artist Enrico Baj has arrived in London – in the booth of Luxembourg & Dayan at Frieze Masters.

Baj rose to fame in 1950s Milan as a co-founder of the Nuclear Art movement, which diverged from fashionable apolitical abstraction to engage with a post-Hiroshima society using collage, kitsch and colour.

In 1967, looking for peace and privacy away from the city, Baj and his wife Roberta bought an abandoned Art Deco villa in the foothills of the Italian Alps where the artist lived until his death in 2003. Together the couple transformed it into both a family home and a domestic gallery for Baj’s extensive creative output, which Roberta still lives in to this day.

The artist’s home stands as testament to Baj’s idiosyncratic approach to art and interior design, which eschewed modern design (a movement he despised) and embraced layer upon layer of lavish detail and colour.

Earlier this year the villa was immortalised in a book, Enrico Baj: The Artist’s Home, published by Luxembourg & Dayan and Rizzoli. The tome explores the ‘uniquely symbiotic relationship’ between Baj and his house; ‘deeply intertwined, the one illuminates the other’, says the publisher.

Every detail, from the paintings on the walls and the found materials incorporated into his collages, to the tassels on a bedroom curtain, is imbued with the artist’s irreverent, intellectually rigorous worldview, one which interacted with 20th century art movements such as Surrealism, Dadaism and CoBrA.

The gallery’s 2017 Frieze Masters display brings a number of Baj’s most recognisable paintings and collage works to London, hanging them so as to create an immersive recreation of the Vergiate villa.

These works include pieces from his Generals, Ladies, Mountains, Modifications and Furniture series, set against backdrops of vintage wallpaper. Also on display is a sofa from Baj’s villa, strewn with twenty cushions made by the artist, demonstrating the interrelation between the artist’s artwork and his furnishings.

The display is the latest in a string of recreated artist’s spaces at Frieze Masters. For 2017, Waddington Custot have remade Pop artist Sir Peter Blake’s West London studio with painstaking care, while last year, Hauser & Wirth transformed their booth into a fictional artist’s atelier.

Read next: What to see at Frieze London 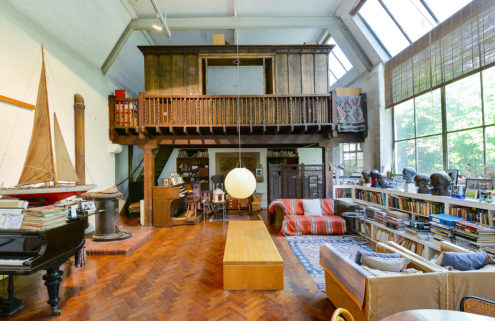