Ellsworth Kelly’s final artwork – a temple-like pavilion with kaleidoscopic windows – will open on 18 February at the University of Texas, two years after his death.

More than 70 years in the making, ‘Austin’ was first mooted in a sketch Kelly made while living in France between 1948 and 1954. The abstract artist continued working on the idea throughout his life, eventually turning it into his first freestanding building – just completed at the university’s Blanton Museum of Art.

‘“Austin” is part of a journey that began nearly 70 years ago,’ Kelly said in 2015. ‘In Boston in 1947, as an art student at the School of the Museum of Fine Arts, I discovered a 12th-century fresco in the museum’s collection that made a tremendous impression on me. Later, when I was living and working in Paris, I would put my bike on a train and visit early architectural sites all over France.’

Kelly’s pavilion references different architectural styles and takes the form of a cross, despite being non-denominational.

‘I was intrigued by Romanesque and Byzantine art and architecture,’ added the artist, best known for his Colour Field paintings. ‘While the simplicity and purity of these forms had a great influence on my art, I conceived this project without a religious program. I hope visitors will experience “Austin” as a place of calm and light.’

Kelly designed its four arched wings with flat fronts, and three of them are punctuated by brightly coloured windows. These patterns – a simplistic sun, block grid and 12-point star – create luminous shafts of colour that dance across the 2,715 sq ft pavilion’s white interior walls and dark granite floors. A fourth windowless wing hosts a totemic wooden sculpture by Kelly.

The artist donated the design of the building to University of Texas’ Blanton Museum of Art in 2015, which raised $23m to realise the structure.

Speaking shortly before his death in December 2015, Kelly said he envisaged Austin as someplace to ‘rest your eyes, rest your mind’. Its abstract glass artworks evoke Henri Matisse’s Chapelle du Rosaire in Vence.

[Via The New York Times]

Read next: Luis Barragán’s iconic San Cristóbal opens to the public for an art show 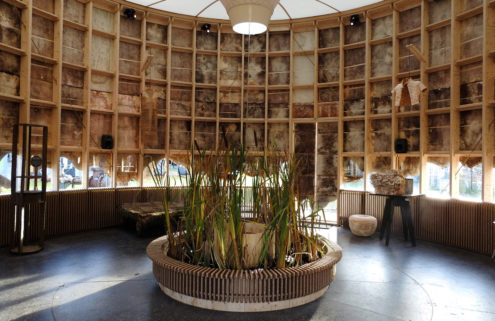 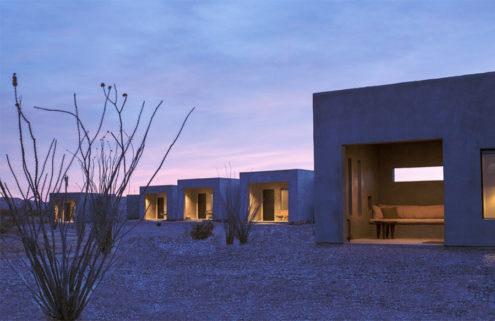 Brutalism blossoms in the desert at Texas’s Willow House