A small block of flats in a poor London suburb has the potential – or at least ambition – to revolutionise social housing in the capital. The so-called House for Artists is a purpose-built home for 12 creative families with public-facing elements and a creative rent framework that should enrich the community for the foreseeable future.

The winning formula comes from Apparata architects, commissioned by the arts-outreach organisation Create London and the Borough of Barking and Dagenham. Local council leader Darren Rodwell says the goal was a distinctive building that interacts with its distinctive surroundings.

‘In places like Shoreditch and Camden,’ he says of two historically arty but now gentrified London neighbourhoods, ‘places have to become [extremely unpleasant] before artists can move in. We think artists deserve housing that is purpose-built and designed for creative people.’

Considered the last working-class area in London, Barking has emerged in the past decade as a viable community for young makers with a streetscape of innovative, appealing housing. Apparata’s scheme sees that shift and raises it with a striking postmodern design that addresses the increasingly varied, complex nature of family.

‘Knowing it will one day be surrounded by towers, it had to have its own strength,’ says Nicholas Lobo Brennan, a principal with Astrid Smitham and Theo Thysiades. ‘It had to exist in the city on its own terms.’

Apparata started with a public-private concept they say is virtually unseen in the UK, due to political red tape, yet popular across the channel (they’ve spent years working in Switzerland). Their concrete exoskeleton accommodates the building’s staircases and walkways, leaving a voluminous, unhindered core they could configure in varying ways. Three dual-aspect flats on each storey access a deep shared terrace and breezeway, equipped with generous overhangs that keep the apartments cool in summer (heating comes from an eco-friendly air-source pump). The ‘open-air escape strategy’ eradicates the need for corridors.

The architects sourced a kinder, friendlier concrete that is 50% industrial by-product. And the materials you can’t see says Smitham, ‘are lean, soft and very adaptable’. The building has 20% less embodied carbon than the RIBA 2030 climate challenge and GLA aspirational targets.

Interior layouts are conducive to making, with wood floors, modular kitchens and ‘soft’ walls that can be removed to create an open plan (or added to block off a nursery). Smitham says the doors, hardware and large, fully opening windows are ‘normal, off-the-shelf products’, meaning they can be replaced and replicated affordably. Doors between some flats, like in a hotel suite, can be opened to create shared studio space – a performance troupe has co-opted those. Four alternative apartments ‘kick out’ to the exterior limits to benefit from angled, double-height ceilings.

Grayson Perry, who sat on a panel to anoint the 12 resident artists, will make an installation for the ground floor: a fully glazed community workshop and a public piazza. The reason for it is in the building’s DNA. Tenants pay two-thirds of the rent from their pockets. The remaining third they pay in community service: lessons, workshops, performances. 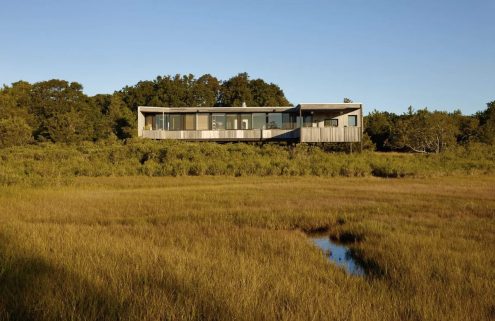