It’s not hard to see the appeal of the Greek islands. From Crete to Santorini, this string of 6,000 islands and islets has something for everyone – sandy beaches, volcanic terrain and mile upon mile of olive groves.

The islands also cater for design buffs: architects like Nikitas Hatzimichalis and React are putting a contemporary spin on the country’s traditional Cycladic architecture, crafting dazzling cubic holiday homes and Brutalist-inspired Greek villas for rent. Here are 8 of the best you can book this summer.

React Architects crafted this contemporary Greek villa in collaboration with its owners Alexandra and Damien, who work in the film and music industries.

‘We wanted the house to be super cosy, practical, welcoming, enjoyable and comfortable,’ says the couple, ‘so we have hand-picked a selection of elegant vintage furniture from the 20th century from flea markets in Paris and Athens, and our favourite second-hand shop in Paris.’

The three-bedroom Greek holiday home has also been tricked out with a 1970s sound-system and video projector for movie buffs, and it has a private swimming pool with views over the island. You can rent it via Welcome Beyond, starting from €315 per night.

A Cycladic take on loft living, Villa Fabrica is the handiwork of architect Yannis Kaklamanis who turned a former wine factory into four minimalist apartments on the island of Santorini. Signs of the building’s former life can be read in the apartments’ vaulted rooms, which incorporate original machinery. Villa Fabrica is close to the Castle of Pyrgo, and is available to rent directly starting from €280 per night.

This minimalist Greek villa sits on the crest of a volcanic crater on the little-known island of Nisyros. Villa Nemésis blurs ancient and contemporary influences, and its architect owner has used local stone and the cubism of traditional Aegean houses to create a holiday home at one with its surroundings. It’s available to rent via Le Collectionist from €370 per night, and has panoramic views of the 14th-century castle next door, as well as the Aegean Sea from its sun terrace.

Built in 2015 by award-winning Greek architect Nikitas Hatzimichalis, the Kechria complex comprises three individual villas which overlook the sandy beaches of Skiathos. Each four-bedroom holiday home has two volumes separated by a pergola-covered courtyard, and comes with its own private pool and outside dining area.

Skiathos is part of the Northern Sporades group of islands and is the nature lover’s pick, thanks to its pristine coastline, and dense natural woodland. That’s not all – it caters to history buffs too: the 14th-century ruins of Kastro are a short drive away from the complex. Rent it via The Modern House from £1,900 per week.

Villa Baios looks out over the sea towards the island of Delos – the centre of the Cyclades archipelago and mythical birthplace of Apollo. Its stone facade mimics the rugged, desert-like terrain of Mykonos island, and the property is wrapped in a dry stone wall that hides it from view. Villa Baios can be rented via Le Collectionist from €3,150 per night, and comes with its own private beach and pool, and a large shaded outdoor terrace for entertaining guests. Speaking of, the main house and its separate guest house can accommodate up to 14 people.

The 300 sq m Crete holiday home can accommodate up to eight guests, and is sited on a 2,200 sq m plot within the city limits of Chania, a short distance from the Therisso Gorge and the sea. Book it via Boutique Homes starting from €590 per night.

Another Paros island holiday home, Villa Aela is a modern riff on Cycladic architecture. The seven-bedroom Greek villa comprises crisp white and natural stone cubes, punctured by small windows and doors. Inside, rooms have surprising volumes thanks to high, vaulted ceilings. The living room and dining room open onto the terrace and swimming pool, but the real selling point is the outdoor lounge – perfect for watching the sun set over the Aegean Sea. It’s available to rent via Le Collectionist starting at €1,630 per night.

When photographers Gerda Genis and Robbert Koene got their hands on this historic stone property on the island of Ithaka, it was a ruin inhabited only by birds. The couple spent nearly four years restoring the building with the help of local craftspeople, and the 6,000 sq m property’s textural interiors combine cement floors with rough, exposed stone walls, polished concrete benches and timber beams. Available to book via Airbnb from £371 per night, Villa Kalos sleeps up to eight guests.

Read next: 7 modern holiday homes for rent in Portugal 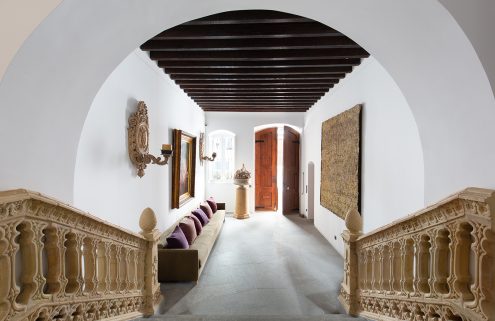 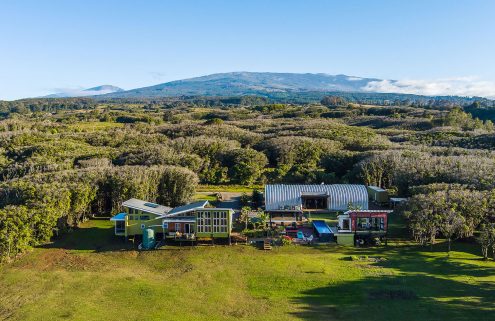 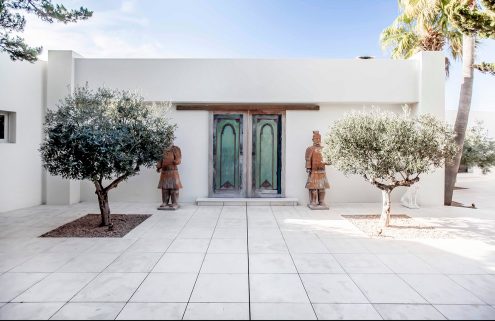