Swedish practice Wingårdh has turned a dilapidated 19th-century freight depot into a food market in Malmö.

The Malmö Market Hall occupies a previously roofless brick structure, which Wingårdh has restored extended via a gabled, weathered-steel addition.

Says the practice: ’The extension’s weathered steel cladding is reminiscent of the industrial character that has long dominated the area; just as the red-rust facades correspond to the brick cladding of the freight depot.’

Malmö Market Hall is the brainchild of sibling developers Nina Totté Karyd and Martin Karyd, who enlisted Wingårdh for the building’s adaptive reuse. The last train departed from the depot in 1955, and nods to its heritage can be read across the building.

Its two volumes are separated by a strip of glass that acts as a visible ‘seam’ connecting the old and new structures. Brickwork, support beams and ducting have also been left exposed inside 50-metre-long building.

Meanwhile, its ceiling has been painted a matt black, which helps ‘direct focus toward the display counters, framed by sturdy canopies in the same colour treatment,’ says the practice.

Outside, a public square next to the Malmö Market Hall building doubles as outdoor stall and event space, and a produce garden is kitted with outdoor seating. 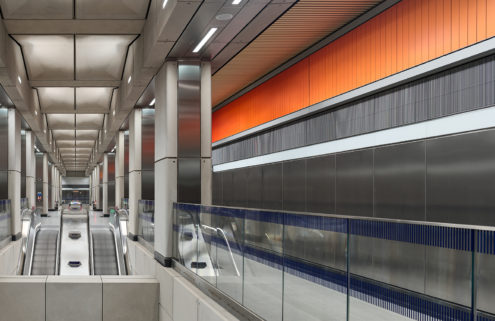