5 interior designers who use colour in radical ways

Hot hues and how to use them

Once upon a time in the 1990s, beige ruled the walls. The fashionable face of interior design was muted – in part thanks to Kelly Hoppen’s championing of neutrals – with colour banished in favour of a palette that extended from magnolia to grey via some subdued taupes.

But the tides have turned, with many of today’s interior designers reclaiming colour and working to demonstrate that bright doesn’t have to mean busy or overblown. Here are five of our favourite colour creatives, whose designs run the gamut from artful pops and jewel coloured ceilings to entire interiors drenched in pink.

They recently completed a VIP apartment in Rome’s Palazzo Fendi, a veritable masterclass in the duo’s artful way with colour. A blue-y sage paint for the walls and hall ceiling; an emerald velvet sofa; a plush red carpet facing off with a mustard chair and a powder blue Lucio Fontana slashed canvas. ‘You have to appeal to people’s sense of fun,’ Moran explained to Forbes. ‘What we try to do is to create a fun experience, but something that’s also elegant, sophisticated and timeless.’

Paris-based designer India Mahdavi has put pink – once dismissed as exclusively for little girl’s bedrooms – back on the interior decorator’s palette. Her work for Sketch in Mayfair and, more recently, for RED Valentino’s stores in London and Rome, has reframed the shade as a sophisticated neutral and captured the heart of diners, shoppers and Instagrammers alike. Mahdavi credits her Irano-Egyptian heritage and early years among the technicolour influences of North America for her ‘pop-orientalism’ and courage with unusual shades. ‘There is something cartoony about my work,’ she told Harpers Bazaar last year. ‘I like putting colours in danger…it’s not always easy to achieve.’ A recent commission for Ladurée in Geneva served up a lilac and lime interior that echoed the sweetness of the brand’s famous macaroons. ‘I am part of the entertainment business,’ she says. ‘I try and bring joy in the best way I can.’

After a decade working with the legendary Min Hogg at The World of Interiors, Faye Toogood founded her own company with the ethos that anything was possible. ‘I didn’t train in furniture, fashion or interior design, so in my head I have no rules,’ she told The Sunday Times Magazine in 2015. Today Studio Toogood creates all three, including interiors collaborations with Dover Street Market, Selfridges and Hermès, as well as private commissions which employ her unique take on colour. In the Notting Hill kitchen belonging to Anna Singh, mint plays off jade against greys and silvers in a refreshingly contemporary juxtaposition. For a flat in Mayfair, she used blue and grey polished plaster to heighten rather than ignore London’s somewhat dour light. ‘Northern Europe is always so gray,’ she explained to The New York Times, ‘there’s no point in trying to brighten a space by painting it white.’

This all-female studio has become Amsterdam’s go-to consultants when it comes to creating dynamic dining and drinking spaces. Recent projects include 2015’s Bar Basquiat, which transformed a former supermarket by incorporating the eponymous artist’s vivid interplay of text and colour. More recently the interior designers completed Bar Botanique, using a palette of green and pink to create an otherworldly forest environment that won over most of Instagram.

For Amsterdam restaurant The Roast Room they worked with Studio Molen on a modern design feast blending copper tanks, bronze accents, marble floors and a bright blue ceiling. ‘I believe colour can really enrich a space,’ says Esther Stam, founder of Studio Modijefsky. ‘It defines the spatial identity and strengthens the experience we are aiming for.’

Obeying the adage of putting his money where his mouth is, interior designer Guillermo Santomà’s dazzling project Casa Horta is also his own home. The young creative – known for his furniture and store installations – renovated a 1920s house in Barcelona, masterfully interplaying natural light, neutrals and fantastical colour to create shadows, shapes and reflections. Period details are paired with bright all-over tones, while cut outs – interior windows, doorways, stairwells – are emphasised through sudden shifts in shade. The result is playful and mesmerising, incorporating an all-pink bathroom, gilded doors and a ceiling painted like the sky.

Read next: Inside the Roman home of Marie-Louise Sciò, creative director of Il Pellicano Hotel 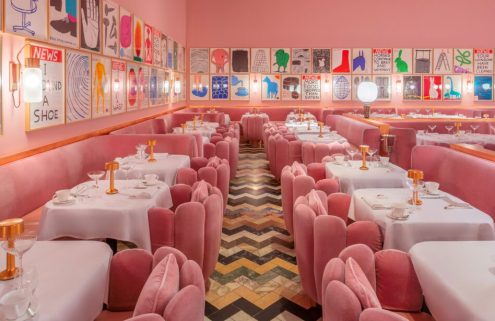 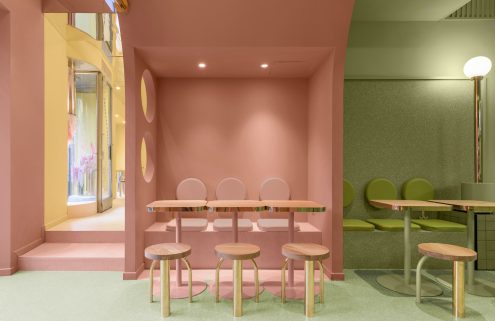 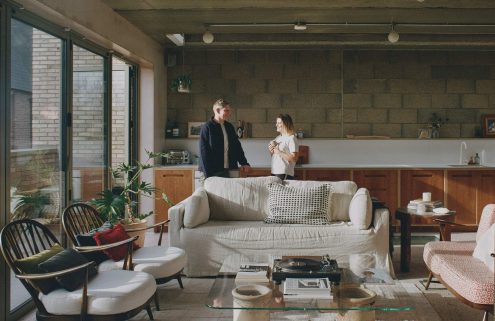 How we live: developer-designer duo Jonathan Ellis and Sophie Smith take us inside their testbed London home Hide 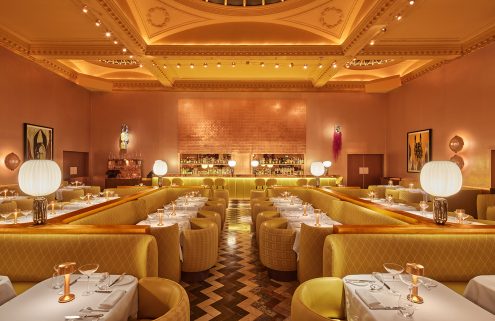