Today Frederick Fisher AIA is beloved in California for his whimsical, irreverent and deconstructivist designs but back in 1979, he was cutting his teeth on his first solo project in Venice Beach – The Caplin House.

Fisher – who worked in Frank Gehry’s practice before launching his eponymous practice in 1981 – designed the deconstructivist dwelling for artist Laurie Caplin and composer Loren-Paul Caplin, who had spent time living on a boat moored on the Seine and wanted to incorporate nautical vibes into their new Los Angeles home.

‘The Caplin house was my apprenticeship. It was my first project, and I tried to pack every idea I had into it,’ said Fisher. ‘I was lucky the design came off, more or less.’

Stepping up to the plate, Fisher designed the three-bedroom home around a towering great room whose curving, ribbed ceiling is inspired by the hull of a boat. Viewed from the exterior, the volume looks like a rolling wave with the building comprising an idiosyncratic assemblage of shapes and surprising spaces.

The Venice Beach property has been restored by its current owner, University of Southern California’s Dean of Religious Life, Dr Varun Soni, with the addition of custom-built handcrafted furniture by master woodworker Shin Okuda of Waka Waka Studio.

Compass agents Natasha Barrett and Billy Rose are listing the Los Angeles property for $3.495m. Take a look at the gallery above.

California compound by ‘Architect to the Stars’ Hal Levitt lists for $6.5m 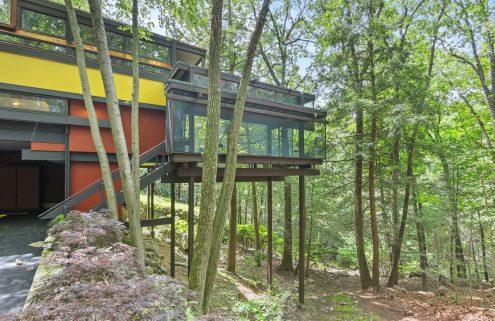