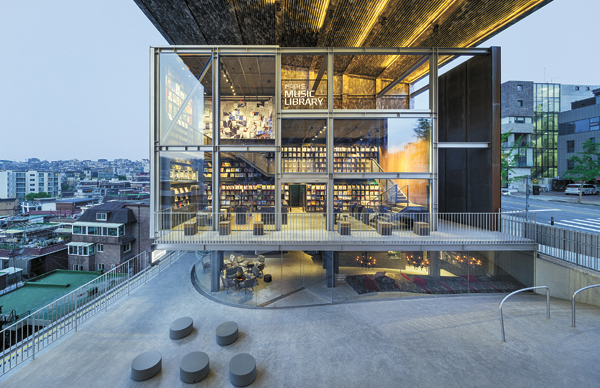 A music buff’s dream space has opened in Seoul, featuring more than 10,000 vinyls, 3,000 books and its own performance venue.

‘I hope this space is used by diverse people,’ says Choi, ‘including those who want to get some inspiration from music or those who want to enjoy a bottle of beer while watching the sunset in the open space while listening to some good music.’

The ground and first floors house the library’s extensive book and record collection, including a copy of the Sex Pistols’ rare 1977 single ‘God Save the Queen’ – one of only nine remaining in the world.

As well as 3,000 music-related books, the library stores every issue of Rolling Stone since the magazine started in 1967. Design firm Gensler, who conceived the interiors, has installed six record players for personal listening alongside the stacks of records, books and magazines.

The Understage live music venue, set up for Seoul’s up-and-coming indie bands, takes up the basement. On its upper level are artworks by the likes of JR and Vhils.

But Seoul’s vinyl treasure chest will only be available to Hyundai Card holders.

‘Through the Music Library + Understage, we wanted to provide Koreans with a valuable opportunity to experience a diverse range of masterpieces of music,’ said Mee-Young Lee, vice president of the Hyundai Card’s brand division.

Music Library + Understage is the latest in the credit card company’s ‘Library Project’ series following the openings of its Design Library in 2013 and a Travel Library last year. 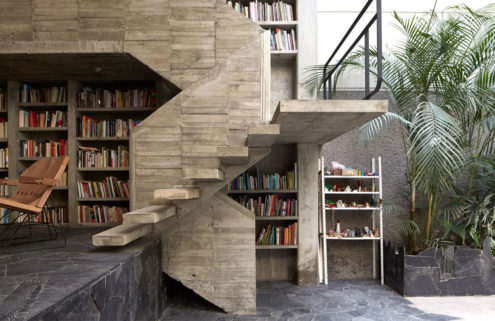 Home libraries to inspire your own reading room