Think wooden abode and the first thing that springs to mind is a remote cabin retreat. But these timber-frame apartments are in the heart of London’s Stoke Newington.

Designed by architect Amin Taha, the Spruce Apartments on Barrett Gove were built using cross-laminated timber (CLT), which is still relatively novel in the capital. But the sustainable material is growing in popularity, especially in Hackney, where the building joins a cluster of CLT structures – including several by Hawkins \ Brown and Waugh Thistleton – popularising the ‘plyscraper’.

Just six units – on the market with The Modern House starting at £425,000 – fill the six-storey building, which sits within a historic conservation area stocked with Victorian and Edwardian red-brick homes.

To fit in with its neighbours, the CLT apartment block has been clad with a textured brick façade, punctured by oversized windows and boxy wicker balconies. It’s capped by a gabled roof, inspired by a nearby school.

Inside, apartments feature ‘raw’ timber floors, ceilings and custom cabinetry. ‘The ability of the CLT to serve as structure and finish removed the need for plaster-boarded walls, suspended ceilings, cornices, skirtings, tiling and paint; reducing by 15% the embodied carbon of the building, its construction cost and time on site,’ says Taha.

You can snap up two three-bedroom maisonettes, three two-bedroom flats and a one bedroom flat inside the building, which has already been shortlisted for a slew of architectural awards.

Read next: Meet the new generation of ‘plyscrapers’ 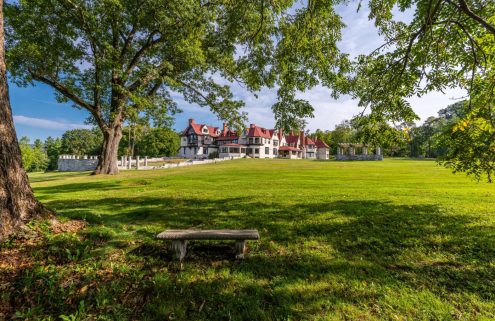 9 Gilded Age homes for sale in the US right now