Some opted for more simple stages – albeit inside storied venues and architectural delights.

Here are our favourite architectural fashion sets for SS20 season.

Burberry’s acoustic extravaganza comprised a custom-built sound system, inspired by the giant horns of gramophone record players, and installed at White City’s Troubadour theatre. A mirrored box rose as the runway show commenced, revealing a rusty runway with the speakers housed in a black scaffolding rig.

Junya Ishigami’s Serpentine Pavilion was the backdrop for Serbian fashion designer Roksanda Ilinčić’s presentation. It’s the second time Ilinčić – known for her architectural flourishes – has commandeered the gallery’s annual commission, and she laid a simple gold carpet around and through the cavernous structure.

London’s Alexandra Palace made its fashion debut at designer Simone Rocha’s whimsical SS20 show. Inspired by Ireland’s Wrenday, the presentation featured models dressed in floating embroidered dresses, frilled necklines and lace set against the backdrop of the wonderfully crumbly-looking theatre. After 80 years of disuse, it was lightly restored by Feilden-Clegg Bradley last year, and the practice left its peeling paint and patina intact.

Miuccia Prada enlisted studio AMO to create her geometric patterned set inside the Prada Fondazione’s multi-purpose Desposito grand hall. Thousands of colourful ceramic tiles were used to create zig-zags, stripes and solid blocks of colour across its floors and the bottom third of its raw walls. The building’s concrete supports were wrapped in a gilded skin to match the golden hues of the lighting design.

It was a clinical affair for Gucci’s SS20 Milan set, which resembled a hospital waiting room mixed with an airport terminal. A conveyor-belt of models moves through the stark white room on aqua coloured travellators for Alessandro Michele’s show, which was carbon-neutral in its production.

The rest of us might be suffering from Brexit fatigue, but Balenciaga dug deep and found inspiration from the ongoing political saga for its Cite du Cinema set in Paris. Creative director Demna Gvasalia tapped La Mode en Images to create a tiered amphitheatre set, reminiscent of the European Parliament chamber and drenched in the bright blue of the Leave campaign.

Bureau Betak designed the outside stage for Anthony Vaccarello’s Saint Laurent SS20 show, and the production company took things back to basics. Over 100 powerful spotlights lined the runway with pillars of white light, in front of the Eiffel Tower. The beams lit up the sky like a celestial rock show.

Biophilic design popped up several times during SS20 fashion season, but no one did it quite as well as Dior’s ethereal secret garden set at the Longchamp Racecourse. Landscape designer Atelier Coloco planted 164 towering trees at the centre of an earth-covered runway for the show, and after it wrapped, they were replanted across Paris.

Virginie Viard picked the rooftops of Paris as the inspiration for Chanel’s SS20 set design, which saw models striding through the zinc-topped walkways and chimney pots of the city’s skyline. 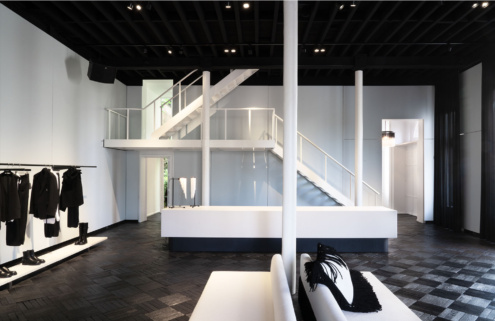