Architecture I by Alexander Hawkins

In the bleak mid winter

A trip to Bulgaria first sparked Darmon Richter’s interest in Eastern Europe’s communist-era monuments. The country’s relics of Soviet Modernism were, he says, unlike anything he had seen growing up in Oxford, England. The travel writer and academic has spent the last few years visiting more than 20 countries in the region, taking photographs of Soviet art and architecture. Now living in Bulgaria, he is two years into a PhD on the subject.

Darmon Richter’s research recently took him on a winter trip to Minsk, the capital of Belarus. For several days, in brutal sub-zero conditions, he photographed the empty streets of this one-time ‘Hero City’ of the Soviet Union.

With temperatures dropping as low as -35ºC, it is unsurprising that people appear few and far between in Richter’s images. Capturing everything from the imposing Belarusian parliament building to marble mosaics of Soviet cosmonauts at a nearby metro station, his photographs depict a snow-covered ghost town. ‘The whole city had a surreal, dreamlike quality about it,’ he says.

The Soviets reclaimed and rebuilt Minsk in an aspirational Modernist style after the devastating effects of Nazi occupation. ‘The city became something like a monument in itself,’ Richter explains. ‘Particularly in winter, the centre of Minsk sometimes felt like one great big open-air war museum.’

Taking pictures of government or military buildings is forbidden in Belarus. This could have proved problematic for Richter but, in the January cold, most security guards seemed reluctant to leave their booths.

In the past, Belarus has attracted mostly Russian tourists and pensioners who see it as a kind of ‘Soviet Florida’ but younger generations aspire to something more contemporary. ‘I spoke to young Belarusians who described Minsk’s architecture as oppressive and totalitarian, and others, particularly from older generations, who said it reminded them of simpler, happier days,’ says Richter.

He is clear that his photographs are documentary in nature and are not a celebration of the Soviet architecture, or the ideology behind it. ‘I think this kind of architecture can be divisive,’ he explains. ‘The strength of people’s feelings – both positive and negative – made this a sober and thought-provoking project.’

Read next – Soviet monuments: what should we do with ‘inherited’ architecture? 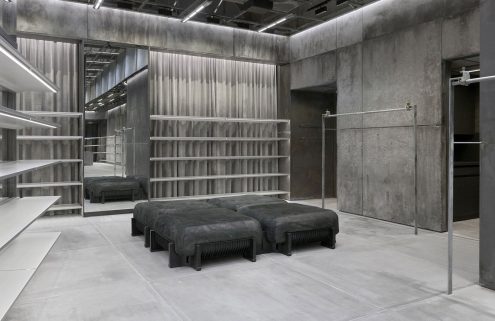