Sometimes the most familiar landmarks can be the most surprising. Luis Barragán’s colourful equestrian estate Cuadra San Cristóbal has graced the covers of magazines, been the backdrop of art shows and fashion shoots, and inspired countless photographers over the decades. But there are still plenty of details waiting to be discovered – if you know how to look.

Architectural photographer Lorenzo Zandri made a pilgrimage to Mexico City’s Los Clubes district to explore the private estate. Built in 1968 for the Egerstrom family (who still own it today) and rarely open to the public, the modernist ranch is Barragán’s most iconic design, famed for its pink and mauve walls, azure water fountain and bold geometric volumes.

‘I tried to not be influenced too much by past photographic references,’ says Zandri, ‘but to give a personal point of view of the space.’

Barragán scooped the Pritzker Prize in 1980 and was commended by the jury for approaching architecture as a ‘sublime act of the poetic imagination. He has created gardens, plazas, and fountains of haunting beauty – metaphysical landscapes for meditation and companionship.’

Zandri sought out Cuadro San Cristobal’s privileged points of view to unlock the building’s spirit, turning his lens on openings of light and walls of colour to suggest space and create a series of ‘discoveries’.

He explains: ‘I figured that the Mexican architect worked [in] layers, through a sequence of spaces based on their functions, showing his ability to create a balanced mix of covered and uncovered structures.’

While other visitors to the private home focussed on Barragán’s famous fountain, Lorenzo – who trained as an architect before pursuing a career as a photographer – was much more interested in the relationship between the architectural elements and the surrounding landscape.

As well as looking through its geometric openings to capture the landscape beyond, he focussed on the stable façade, private garden and the pool, which he describes as ‘a sort of melancholic but also intimate space.’

‘This kind of shot for me represents the essence of La Cuadra San Cristóbal as a liveable space with a story to tell.’ 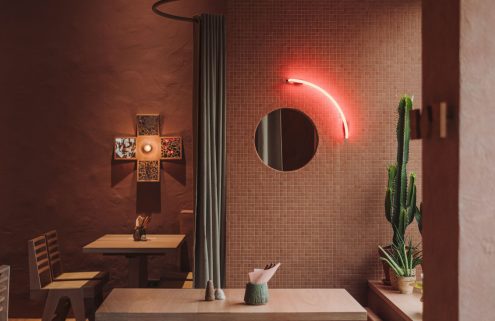