Welcome to our weekly property digest, where we bring together the best homes for sale and rent across the world. This week, we have a Swedish countryside castle and a gothic lodge in the UK among our discoveries.

3 bedrooms; £700,000 via The Modern House
Old meets new at  Woodbridge Lodge, which was built in 1806 by architect James Wyatt in the grounds of the now-demolished Rendlesham Hall. Architect Hugh Pilkington revived its remaining grade II-listed folly in the 1990s, creating a remarkable award-winning glass and stone home which is now for sale. Take a look around the Suffolk property’s minimalist interiors.

5 bedrooms; $7.95m via Deanna Peters
The Norman Lykes Residence was the last house that Frank Lloyd Wright designed before his death in 1959. The Arizona ‘sun house’ was completed by his former student John Rattenbury in 1967. The spiralling Phoenix property mimics its rocky surroundings via its colour palette and comprises a series of concentric circles. Peek inside the landmark home.

A converted cooperage in London, UK

4 bedrooms; £7.25m via The Modern House
Astounding volumes are hidden behind the modest facade of this RIBA award-winning converted cooperage by Chris Dyson Architects in London’s Clerkenwell. Industrial proportions have been retained inside the London property which has exposed brickwork, smooth concrete floors and a freestanding blackened-steel staircase that twists its way through the height of the space. See more.

27 rooms; 20m SEK via Fantastic Frank
Dating back to the 14th century, this grand country castle in Sweden’s Österlen is rich with history. The fortress has fairytale pink walls, turrets and a whopping 27 rooms –  all decked out in chintzy Swedish country styles. Gärsnäs Castle’s historic elements include a brick vaulted cellar (now used to stash wine) as well as tiled stoves and ornate fireplaces. Take a tour of the grand Swedish property.

‘The Perch’ in Byron Bay, Australia

Sleeps 5; from $495 per night via Byron Beach Abodes
This rustic retreat was designed by Byron Beach Abodes to nestle within nature above Possum Creek Valley in the Byron Bay Hinterland, on Australia’s east coast. The countryside home reflects its earthy surroundings with a terracotta washed mudbrick exterior, timber slatted cathedral ceilings and natural brick-paved flooring.

Villa 2; 4 bedrooms; from $684 per night
Villa Massilia comprises a trio of holiday homes hidden down a quiet laneway in Bali’s bustling Seminyak. We’re honing in on ‘Villa 2’, renovated in 2019 by local practice Design Assembly. It has double-height ceilings, pared-back interiors, a swimming pool and is a short walk to the surrounding restaurants and beach clubs. 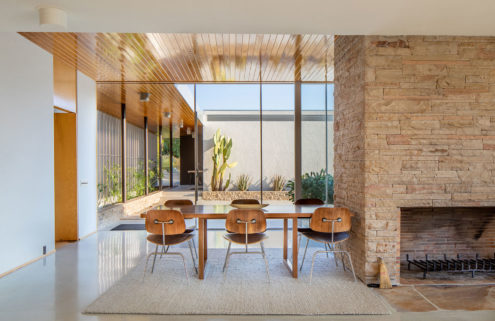